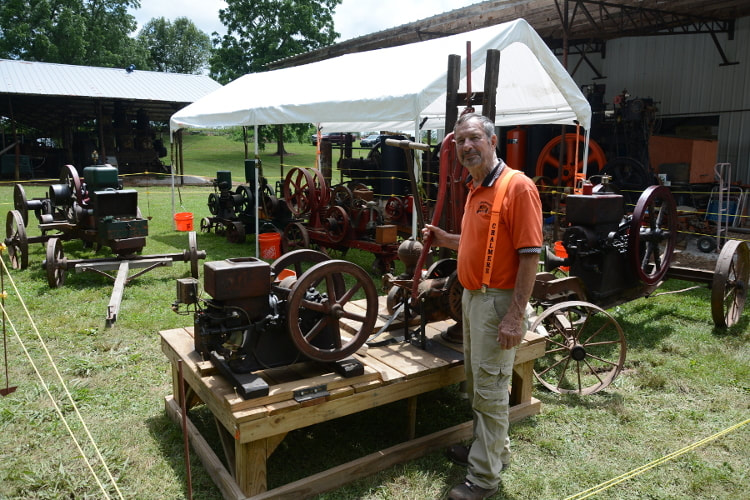 Showing Off His Collection Of Small Engines

My plans for the weekend were to visit the Rusty Wheels Club site and see their demonstrations of old engines running. I went a few years ago and was fascinated by their equipment. I wanted to go back and take some movies of the stuff running. I didn't do much of that last time. They normally open on Fridays as they set up but this Friday it rained in the morning. I drove out that afternoon and talked with some of the members as they brought in their collections. They told me that they would be trying to get the old sawmill running the next morning. So I went out about 9am on Saturday and found them busy getting everything ready and starting up some of the equipment. The last time I visited show I didn't take many videos but this time I wanted to try and get one of each of the major pieces of equipment, and members displays. 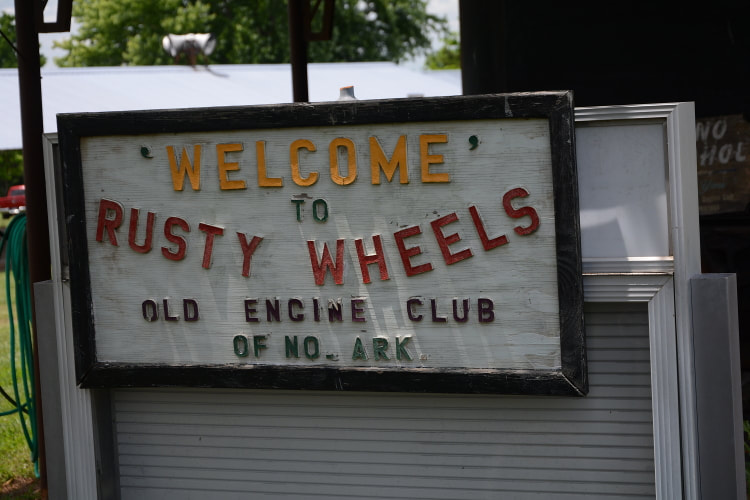 Welcoming Visitors To The Exhibition 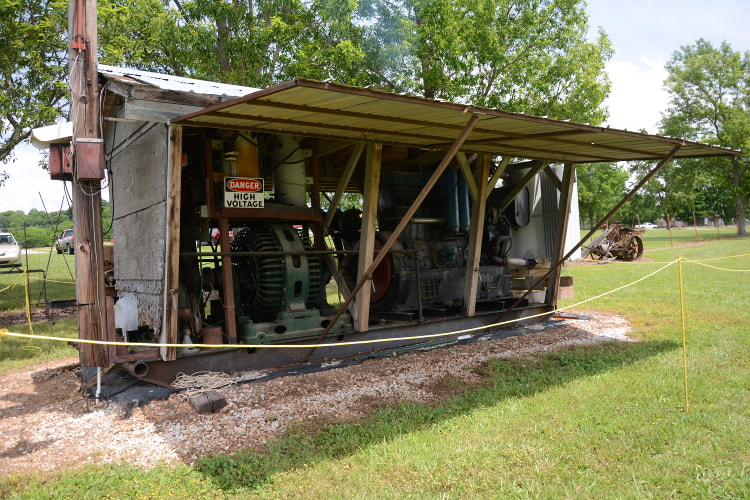 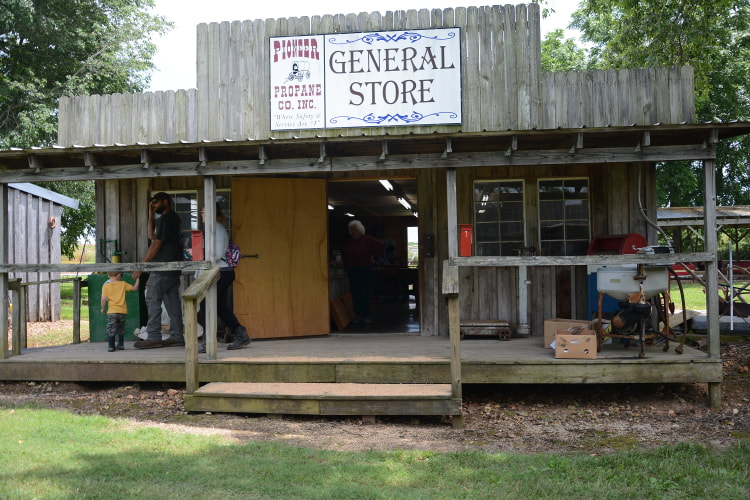 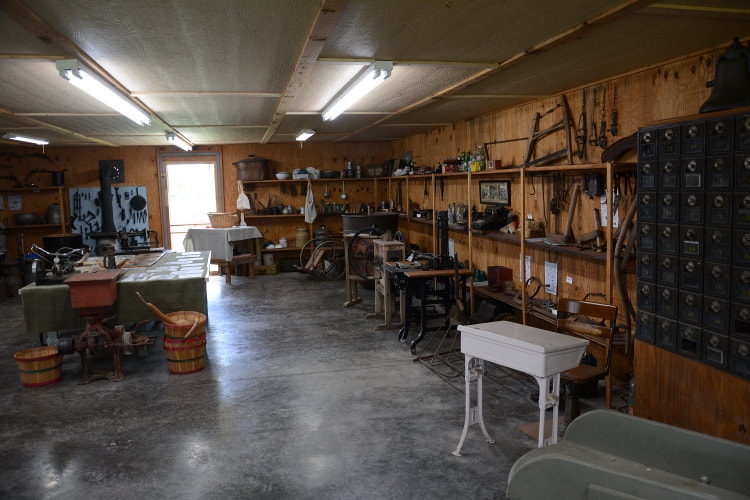 Old And New For Sale 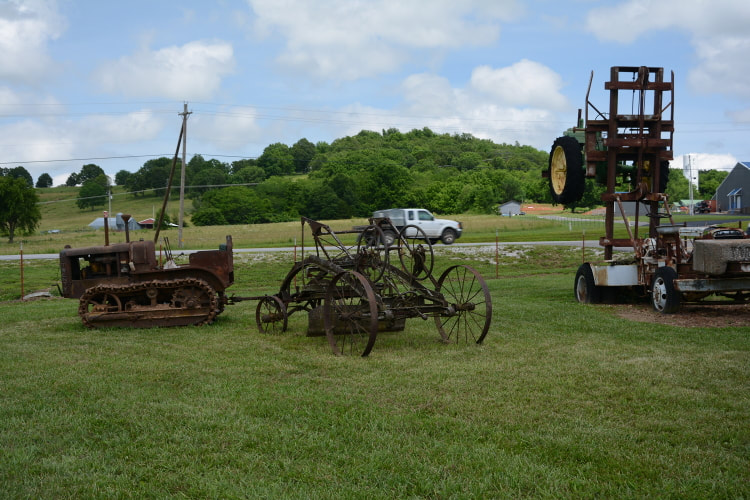 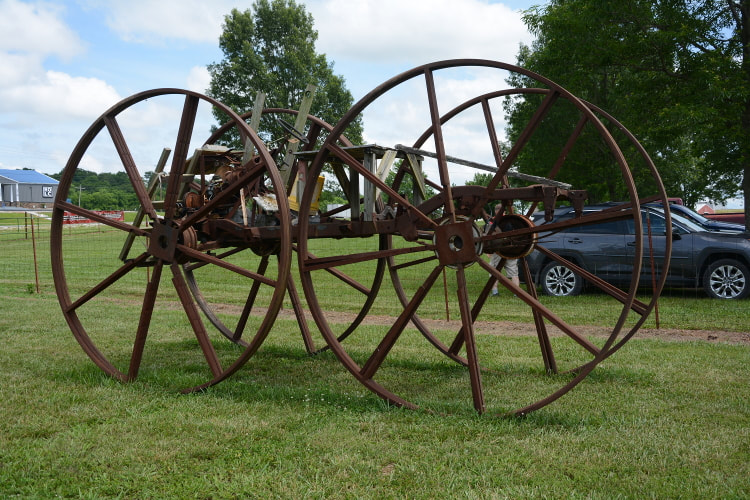 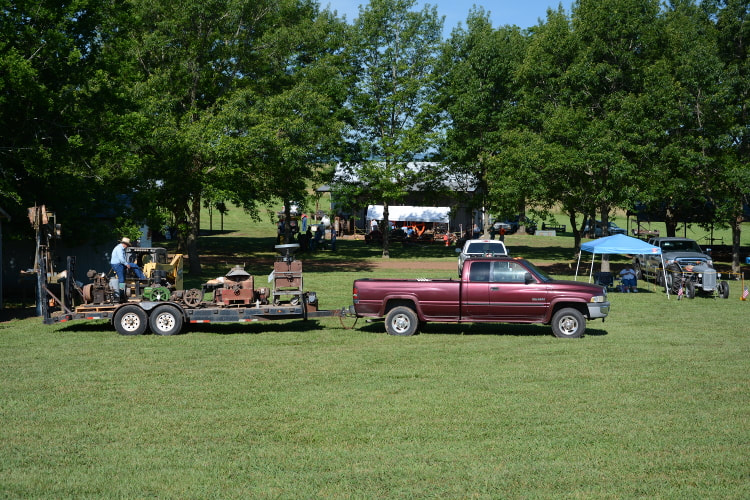 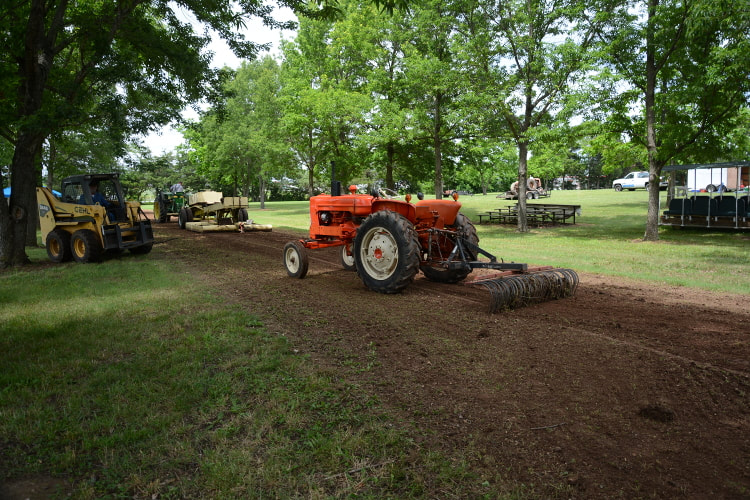 Preparing For Saturday Night Tractor Pull
I took a tour around the permanent club grounds which lie just outside Harrison. Many of the permanent displays have their own protective areas and quite a few members brought tents to shield their collections from the weather. As usual there were rows of more modern tractors, along with more unique vehicles. I especially enjoyed the large wheeled, home made vehicle which I assumed was used in rice fields.  I stopped to watch a club member starting up his engines then wandered over to a covered building. The talk was when it started up it would blow smoke rings! Sure enough it did. I stopped by the General Store and also "Rosie's Chuck Wagon" for a bit of refreshment. 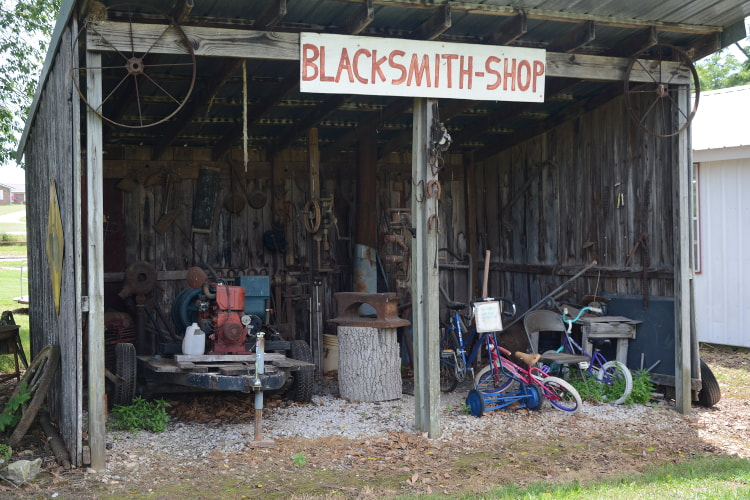 Old Shop No Longer In Use 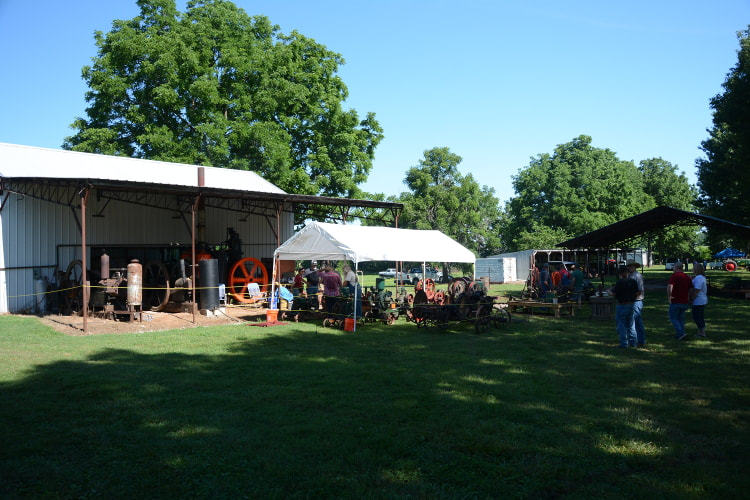 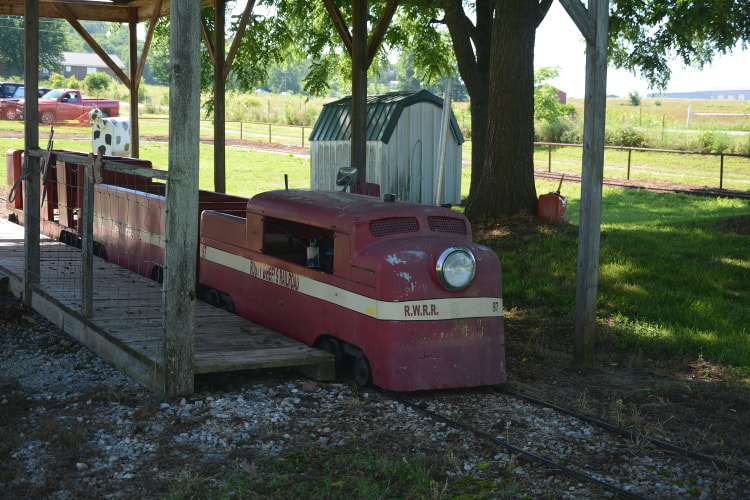 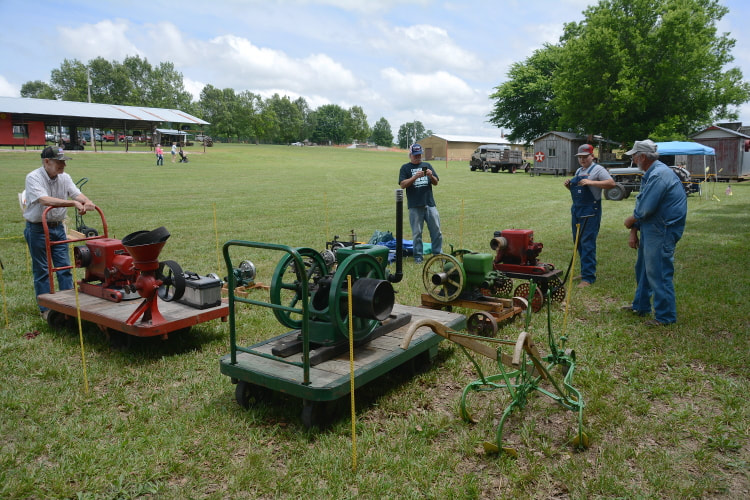 Setting Up A Personal Collection 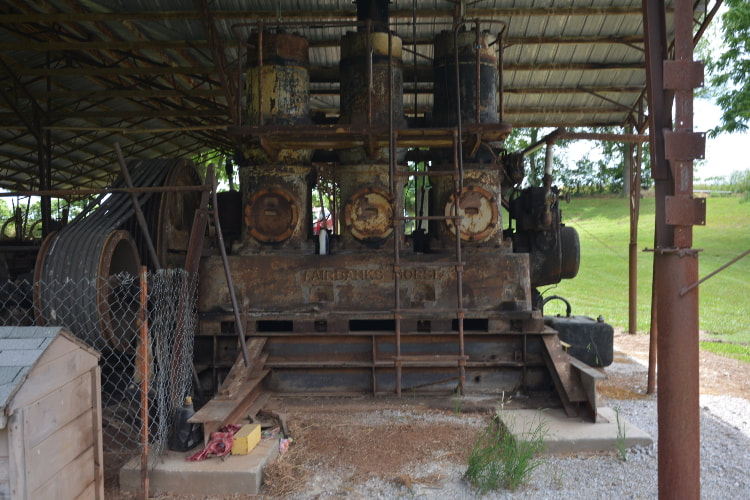 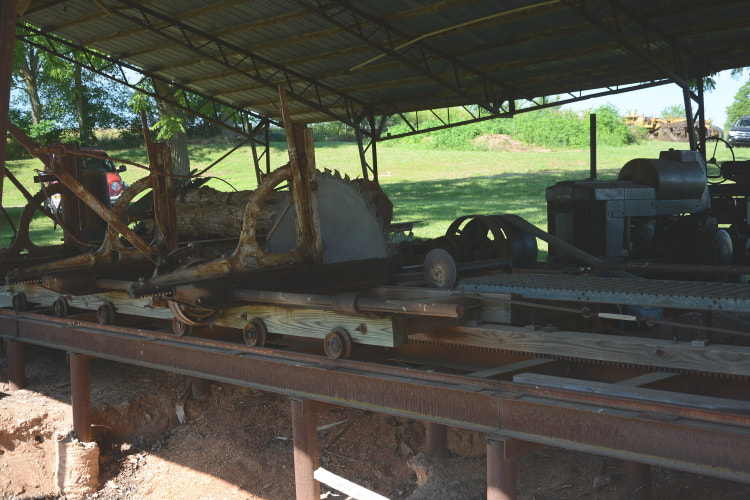 1913 "Giser" Saw mill Ready To Work
I visited the Toy Train display, which is built on an old trailer so they can take it to other locations. Due to the rain they were just setting up but were gracious enough to run the trains for me. Close by was a portable mill grinding cornmeal for customers. Talk about fresh! There were members who were attempting to dry out the track for the tractor pull later that evening. Lucky it was warming up fast and the track was quickly drying. I ambled over to where a modern day blacksmith had set up a portable forge and was getting ready to make a blade for a knife. I heard a whistle and looked over to see that the Rusty Wheels Railroad was getting ready to make its first run of the day. Moving quickly I managed to get a nice video of them. The kids and the parents were having a good time.
As I made my way around I noticed one gentleman in particular. He seemed to be working his way around the grounds, assisting others in getting their equipment to start up and run. He had a great big smile on his face and was clearly enjoying himself.  I confess I followed him and got some really good video of the show and demonstrations. After the small engines were puffing and smoking and wheezing, but working, that man and a small crew headed toward the structure where the saw mill was located. I followed. I had the opportunity to talk with him and he told me that the giant diesel engine was started with compressed air, after priming the cylinders. Before starting it I think they connected a large drive belt from the engine to the sawmill.I could not help myself as I watched they manually turn the engine to prime the three large cylinders. I got so excited that when they put the compressed air to it and it turned over and started, I started cheering them  on.
I moved over to the old time saw mill and watched it working. I didn't see any OSHA signs on it and  to me it looked incredibly dangerous. There were several older members who started it up and one particular man who stepped up to run the bland. I am sure he was the same man who ran it the last time I visited, (it was I checked my video from the previous visit). It is an important point, it takes someone with the knowledge and experience to run it safely and also effectively. He loaded up a raw cedar log and proceeded to square it up by first taking off two sides. then squaring that. After taking a few boards off of each side, he had it down to a nice,into square piece of lumber. He then  cut the result into  4 inch planks. It was really cool to see it all working together, the large engine driving the belt and the sawmill cutting the boards. There was quite a crowd around as they processed a few more logs. The finished product was being loaded onto a pickup truck. I believe the man who donated the logs  was the one taking the boards and planks home. It was just after noon when they finished up the morning session. Everyone had a big grin on their faces as they were successful in getting all the engines running. It was time for a lunch and they headed  off for some well deserved refreshment and I headed back to town.

Harrison is a small town situated in the center of the Ozark Mountains. While not a tourist destination per se, almost all the area attractions are within 30 minutes of downtown. I find it incredibly handy. Most small towns have thier festivals, fairs and annual attractions. I hope that each of ou can come stay in Harrison, either in the spring or fall and visit the Rusty Wheels Old Engine Club spring or fall show, You can check the dates at their website.
Back To Hikes & Photos