Cotter And Big Spring Along The White River 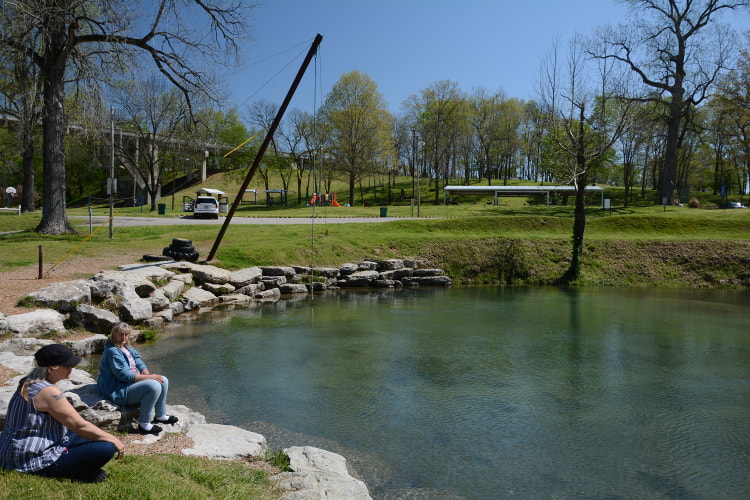 It was supposed to be 80 and sunny, Bill and I wanted to take a drive somewhere and decided on Cotter, Arkansas.  It sits on a horseshoe bend of the White River and bills itself as the "Trout Capital, USA." For the angler who is after big trout, you could not ask for a better spot.
Regarded by the Arkansas Department of Game and Fish as a trout sanctuary, the Big Spring itself  is said to contain water which comes from famed bass stream, Crooked Creek, just next door in Marion County.  Known as a meeting place for Native Americans before the arrival of white settlers, the area that is now Big Spring Park is considered to be heart of Cotter. Located under the rainbow bridge, the park contains a baseball field, volleyball court, picnic areas and restrooms.

We crossed the historic Cotter aka. the R. M. Ruthven Bridge and into the park. The bridge is recognizable for its Rainbow Arches, it was the first landmark in Arkansas to become a National Historic Civil Engineering Landmark and is one of only a small number of bridges designated as such. ​This was the only bridge built by Marsh in the state of Arkansas. Cotter Bridge was also one of the largest designs created by the Des Moines, Iowa company using their Marsh Rainbow Arch patent. 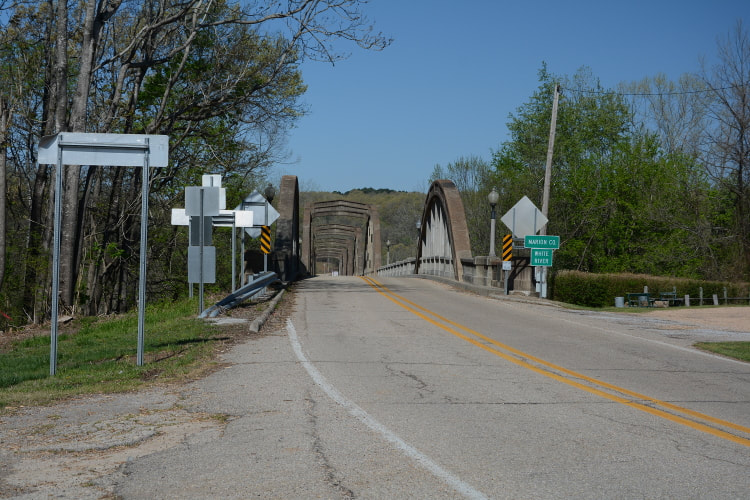 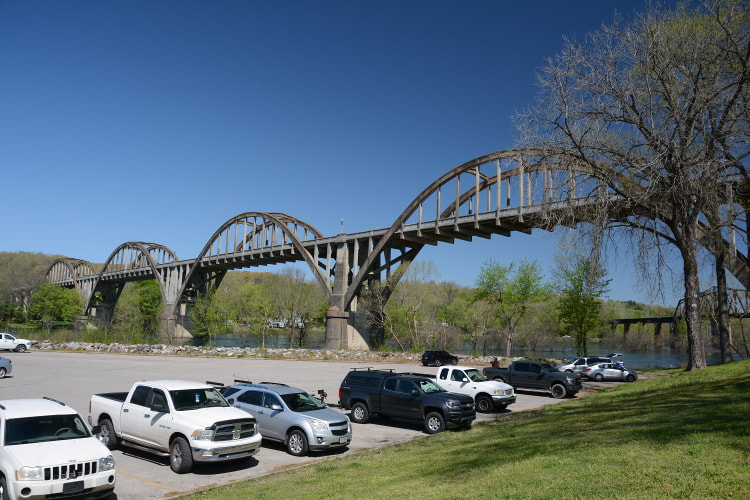 Four Of The Five Spans 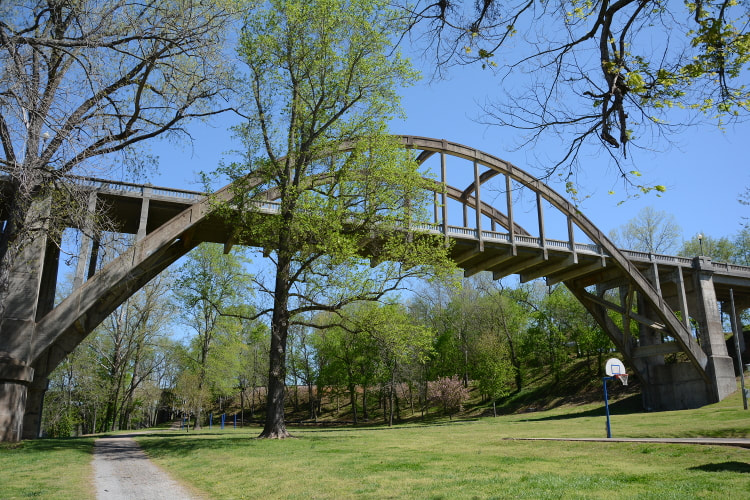 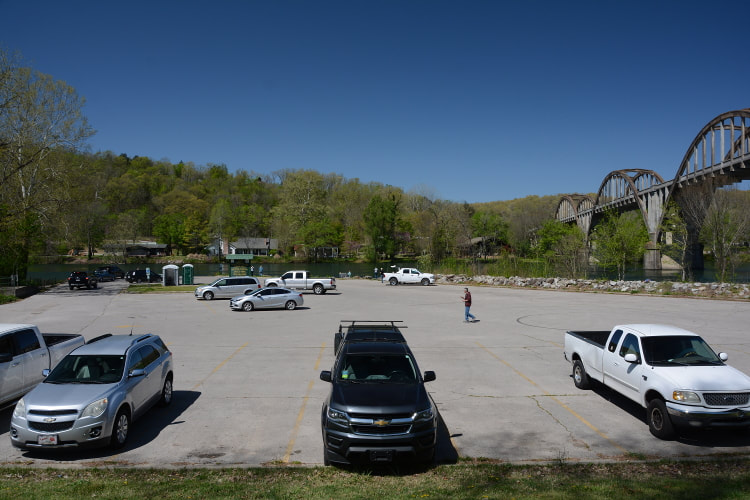 Quite A Popular Place
Our first stop was the public bathrooms.Wow! The citizens of Cotter show the pride they have in their park by the cleanliness of the restrooms. They are the cleanest I have ever seen, or smelled. We decided to head over to the railroad car exhibit. As we walked over we notice that the park was not really full of people but there was a constant coming and going of folks. Past the gazebo was the Anglin-Tinnon Railroad Workers Memorial, paying homage to the role the railroad has played in this area and the workers who made it happen. There are two cabooses, a bronze, life-size sculpture of a conductor, a kiosk with important historical information about the town and the railroad. 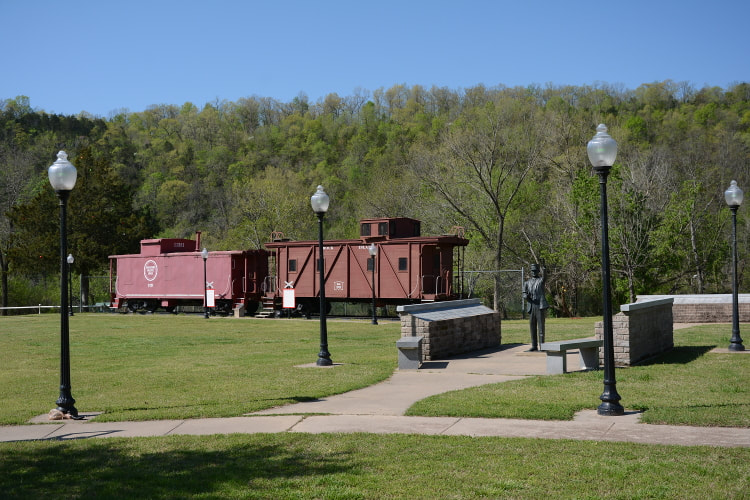 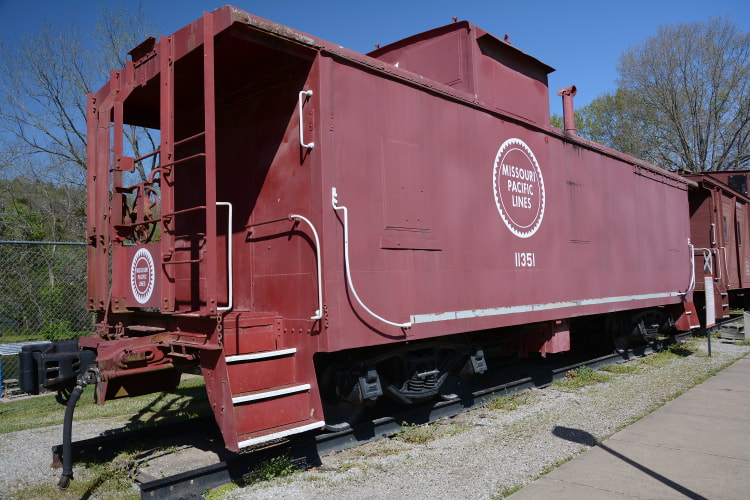 One Of The Rolling Stock On Display 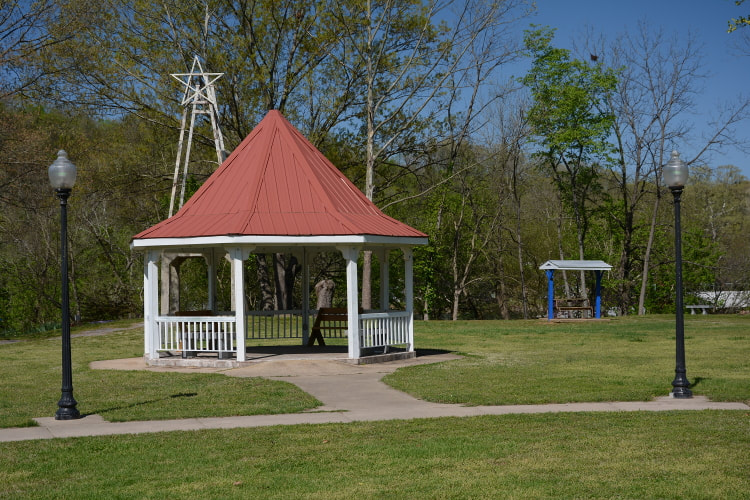 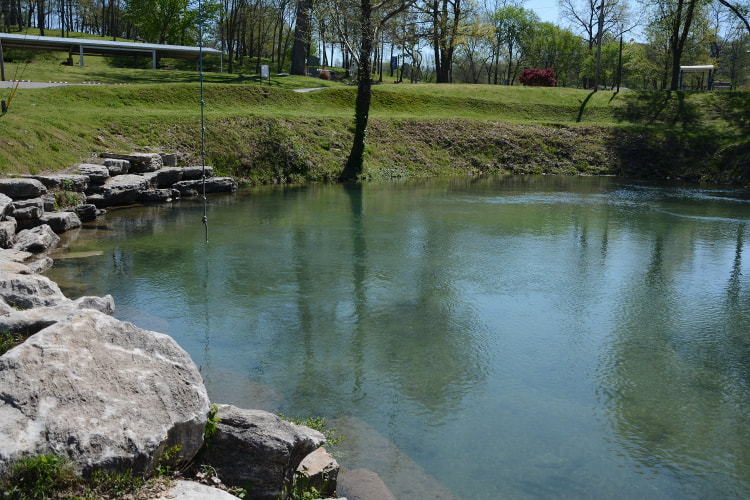 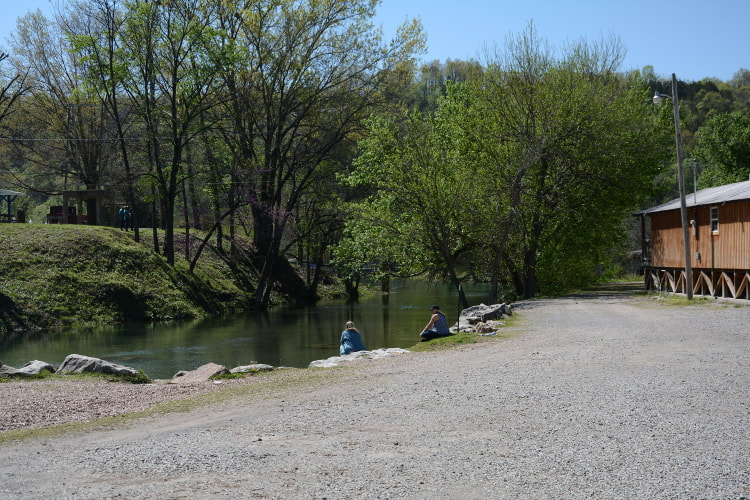 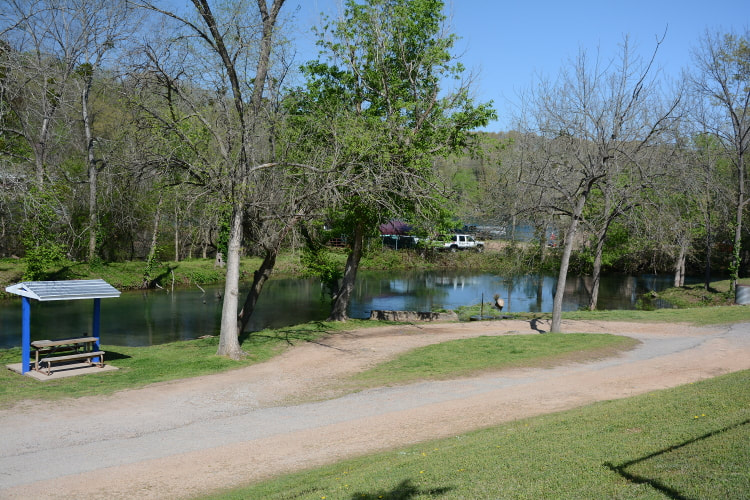 Fishing Along The Shore 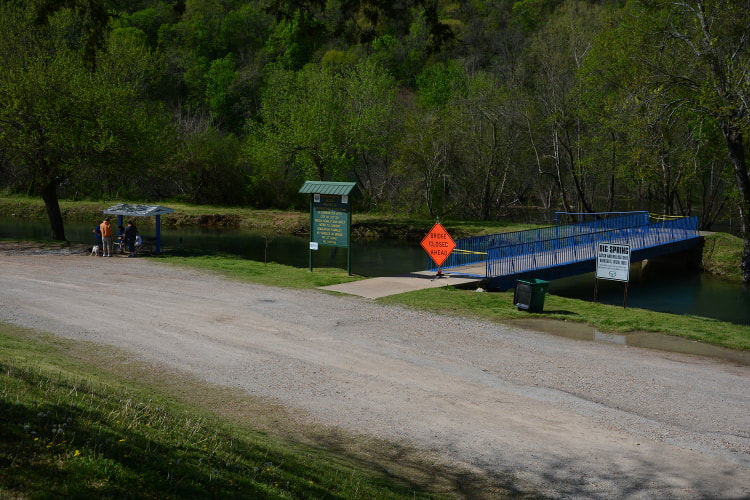 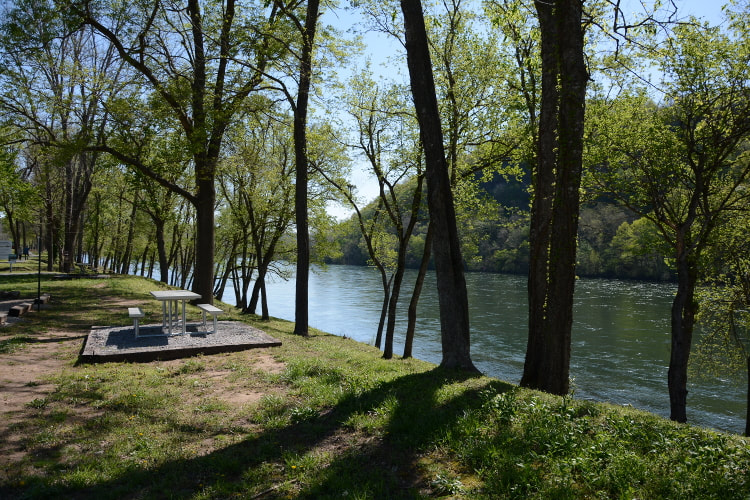 Plenty Of Spots Along The White River 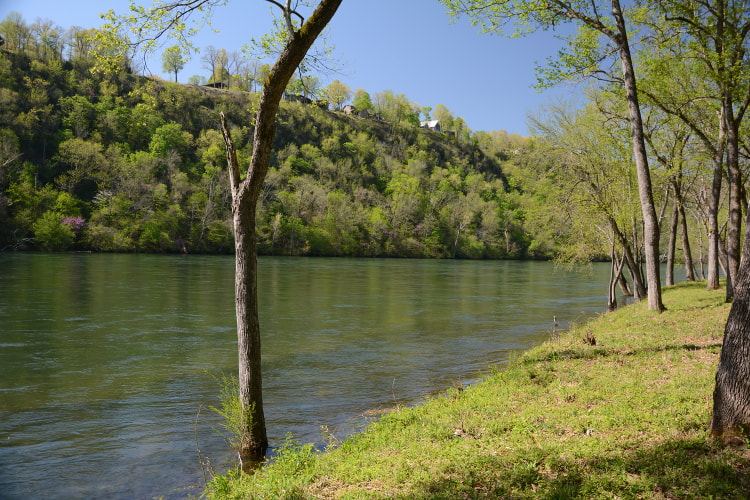 You Can Fish From Shore 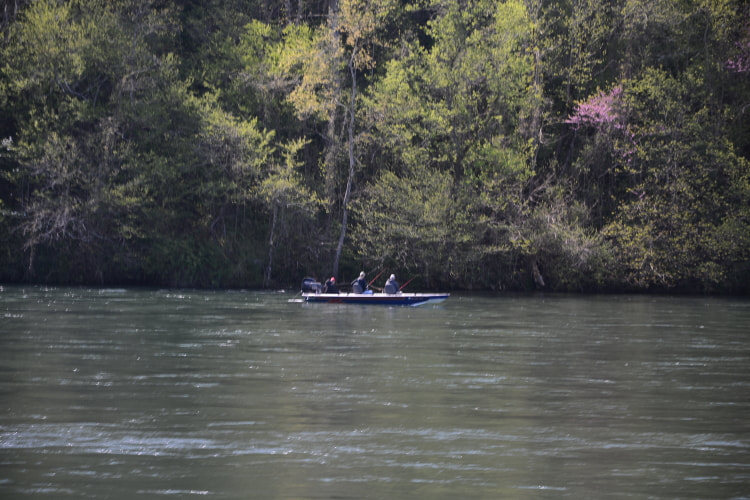 You Can Fish From A Boat
After exploring the spring we just wandered around. The park is the starting place for the upstream walking trail, two miles of beautiful scenery beside the river under the cliffs, and the downstream walking trail between the creek and the river.  After walking a bit we noticed that the trail was closed due to renovations so we just drove along the White River, stopping when we wanted to enjoy the scenery and take pictures. 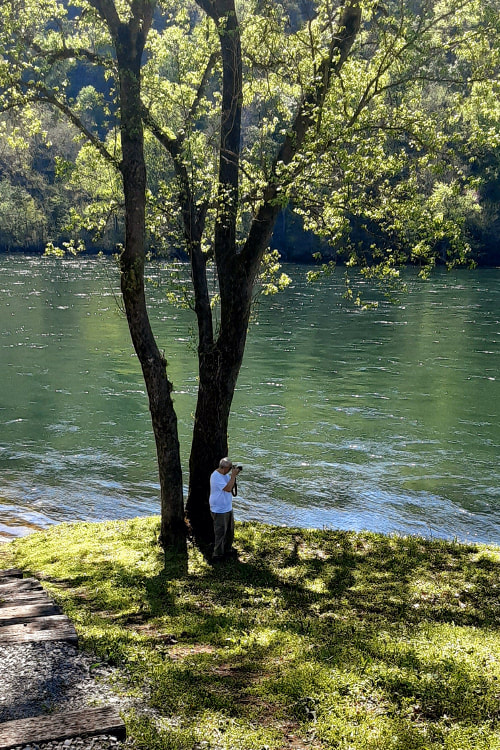 The Barefoot Traveler Taking Pictures Along The White River

Even if you can't hike ten miles or paddle a canoe all day, you can still enjoy the Ozark Mountains of Arkansas. There are plenty of day trips and drives you can take that will get you outdoors and exploring the Natural State. Some are easy access along major routes, some are hidden gems down a dirt road. I invite you to follow in our footsteps!
Back To Hikes & Photos