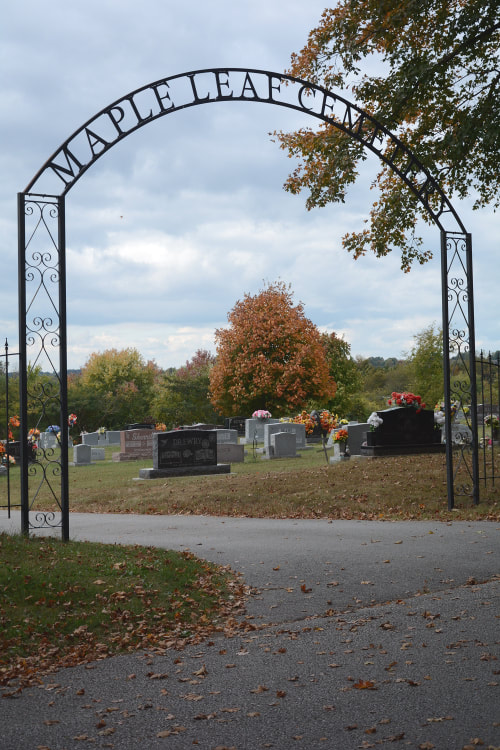 Fall temperatures have finally arrived here in the Ozarks. October is always one of my favorite months. The sometimes oppressive heat and humidity give way to cool mornings and pleasant afternoons. I wanted to make sure and get some fall color pictures before the leaves began to get blown off the trees. I took one trip down the Buffalo River, entering from Highway 206 and exiting back onto Highway 7, taking a drive through the Erbie Area. My second trip was just around town and up to the Maplewood and Maplecrest Cemeteries. 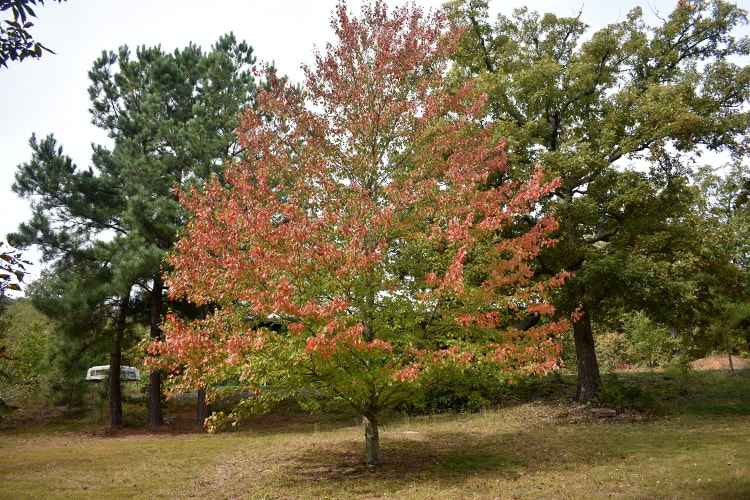 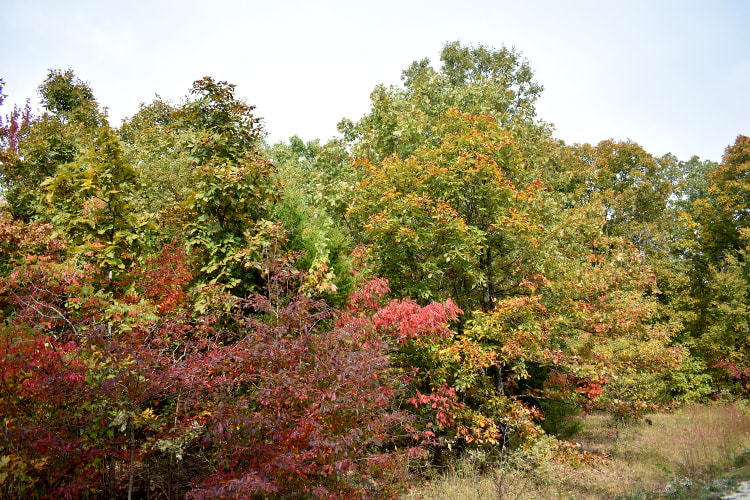 Color Along The Road 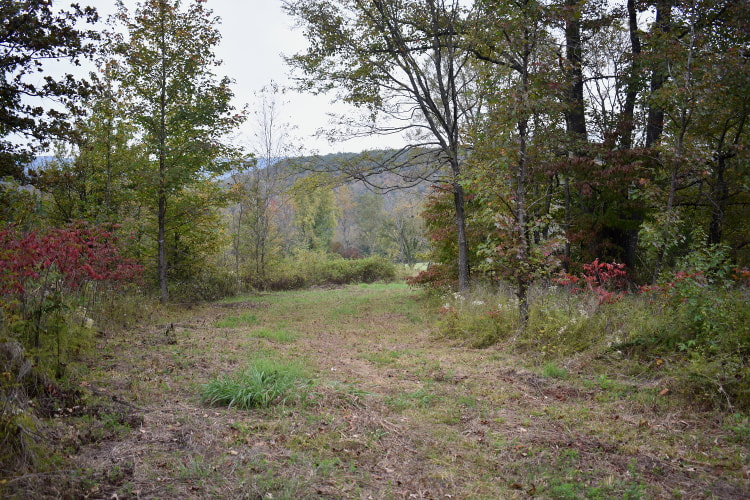 Strolling Through The Park 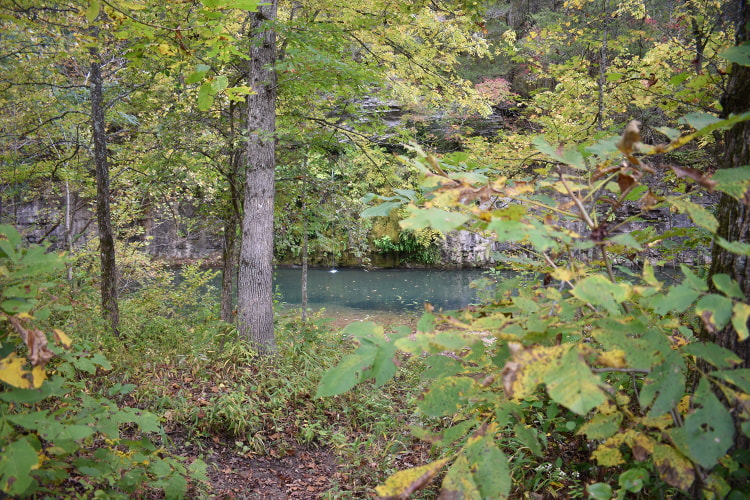 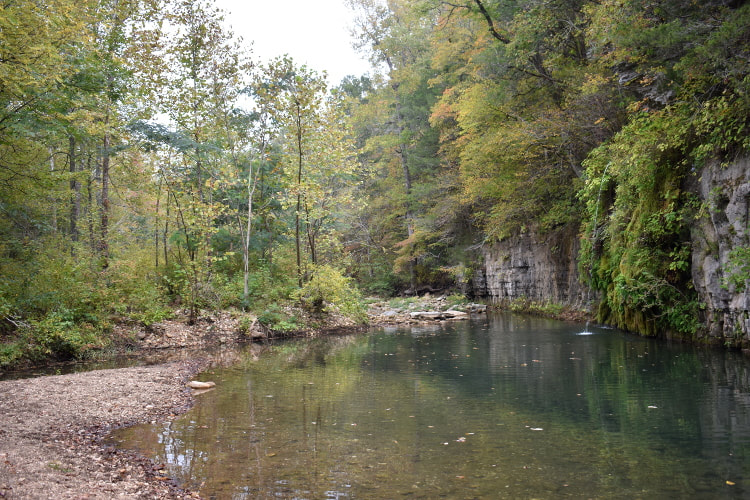 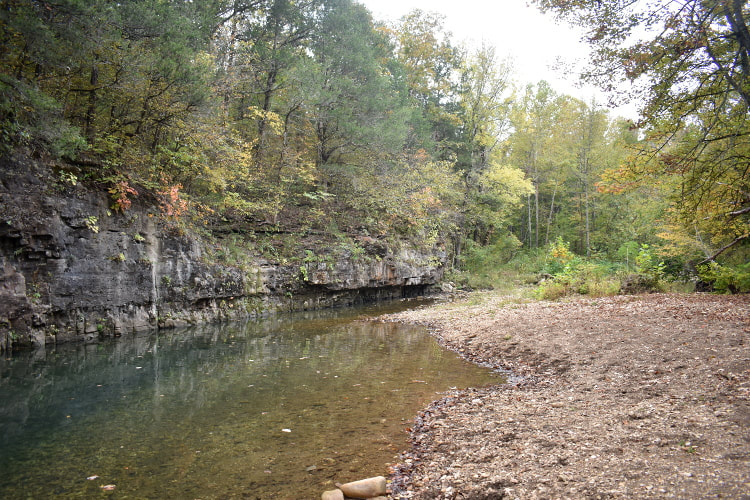 Creek Meanders To The Buffalo River
October 6 was a hazy, overcast, warm day as I made my way down to the Eribe area of the river. It was a weekday but I expected vacationers to be abundant. The New Eribe Campground has electrical hookup for RV Campers. The first thing I noticed was some road
I could see a vehicle on the other side of that sign, parked in the lot by the homestead. So, I moved the sign and drove on through. After I did that I saw two men who obviously were working on the roads. I stopped and told them I moved their sign. They said no problem they were going around and removing them all that day. I inquired about the road from Compton to Erbie, which I heard they were going to fix. They said it was all done and a sedan could make the drive now. I spent some time visiting with the man who had that car. He was from out of state and wrote travel articles which he posted to Facebook. I forget his name. While we were talking a group riding horses came by. They were a local group, just out for a nice ride on a warm, fall day. I left the homestead and took the long way back to Harrison. 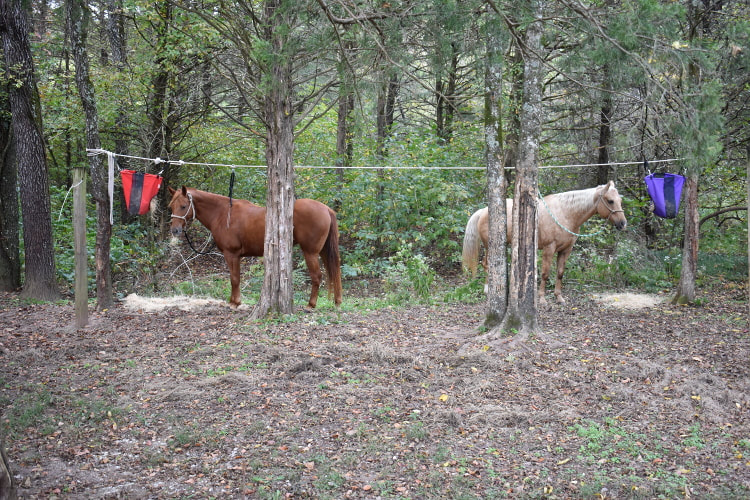 Finishing A Snack Before Ride 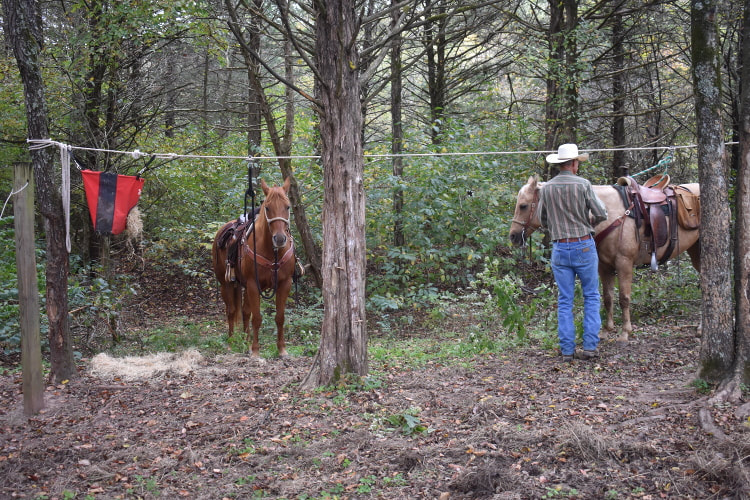 Getting The Horses Saddled Up 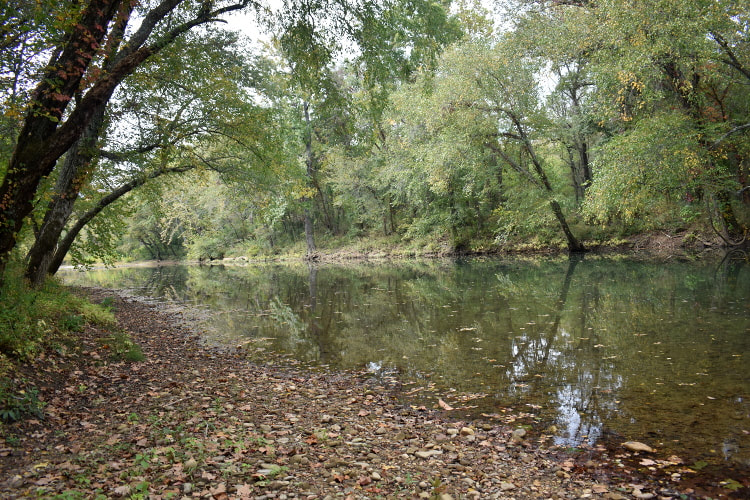 The River Is Low But Still Beautiful 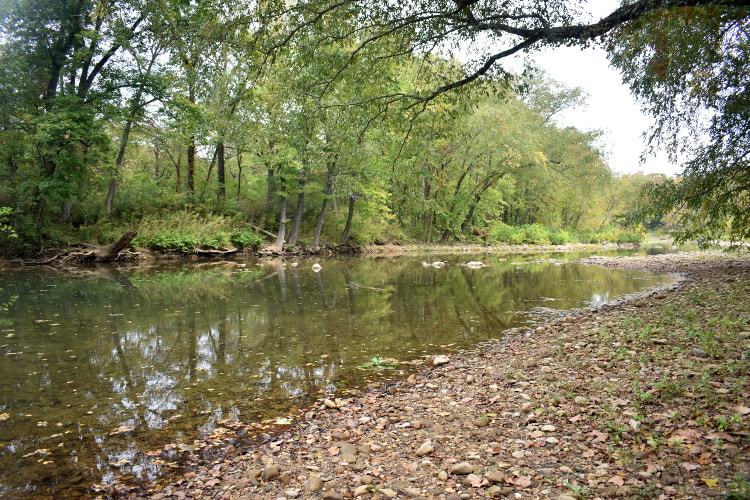 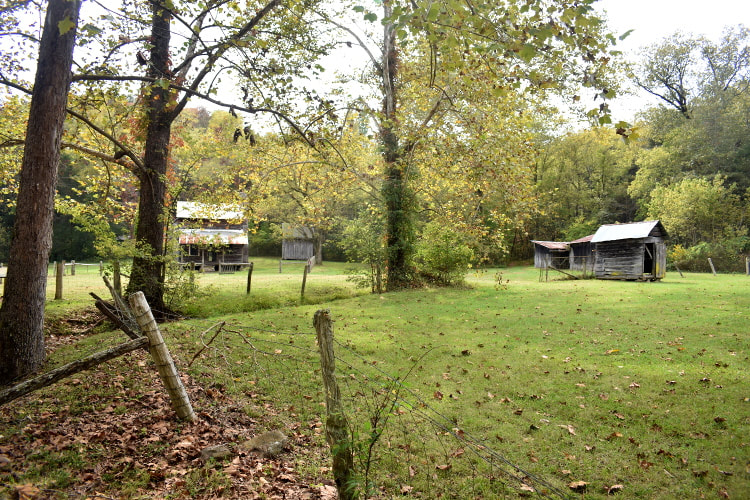 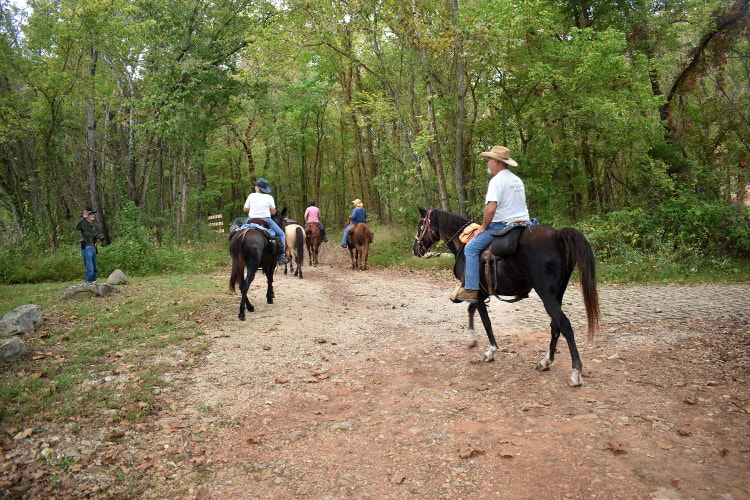 Riders Mosey Past The Homestead
The next day, October 9th was a beautiful, sunny and warm day. I thought I would spend some time just driving around town and checking out some of the more colorful trees that were sprinkled around town. My first stop was along Capps Road, heading into town. 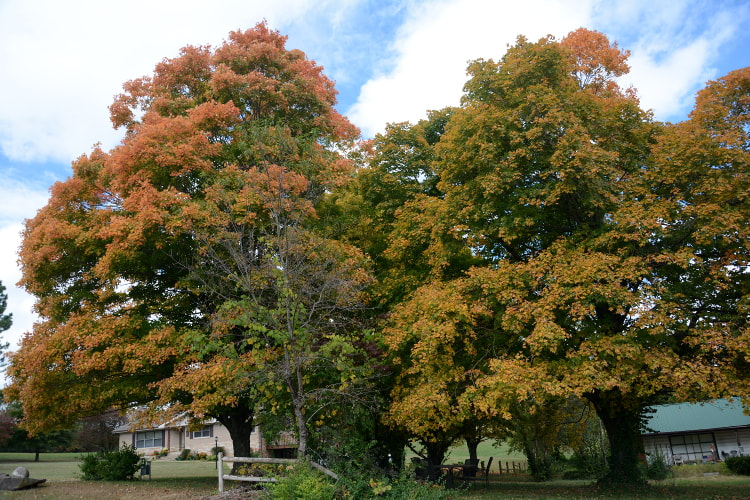 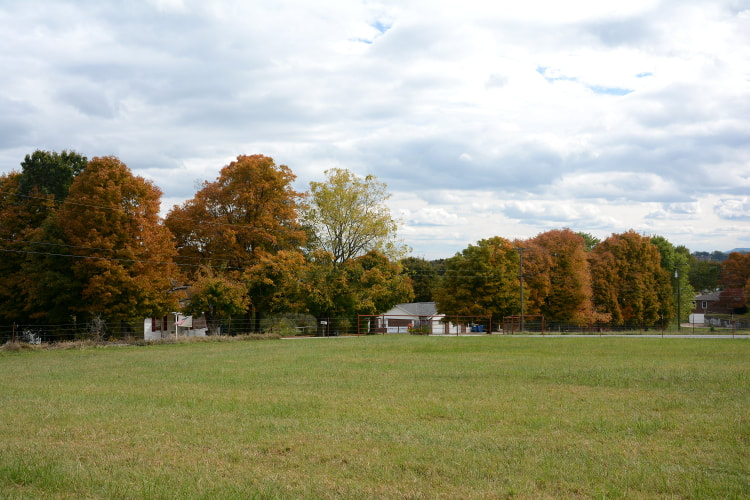 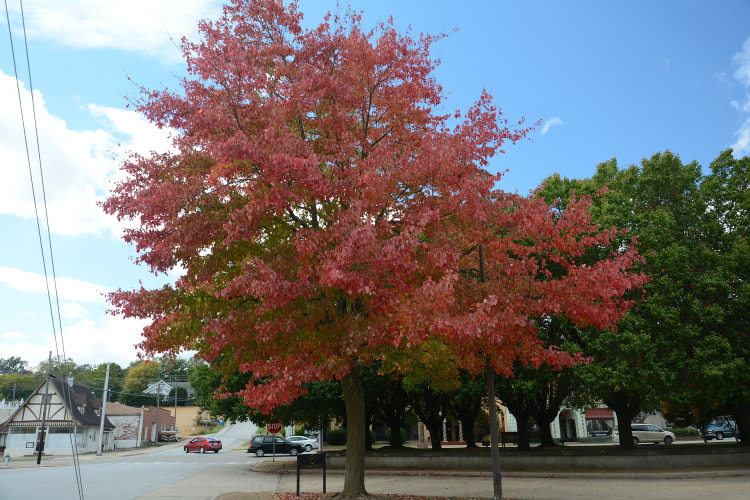 Downtown On The Square 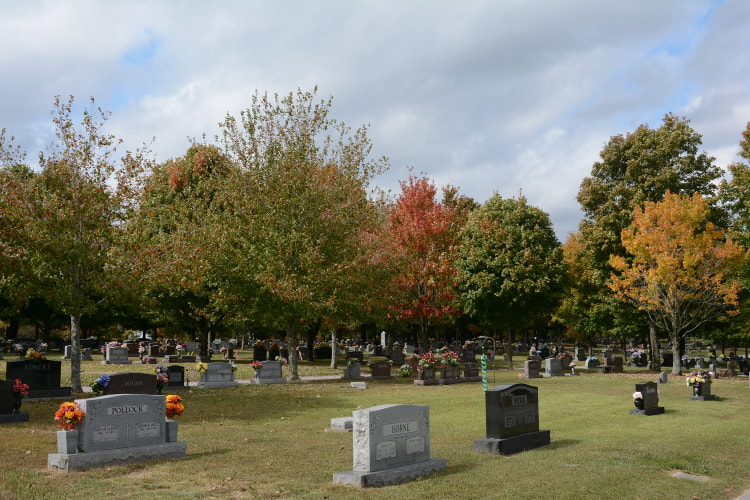 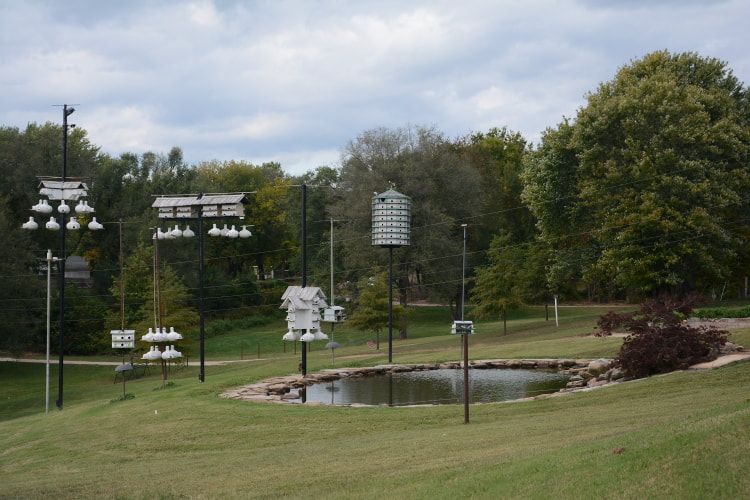 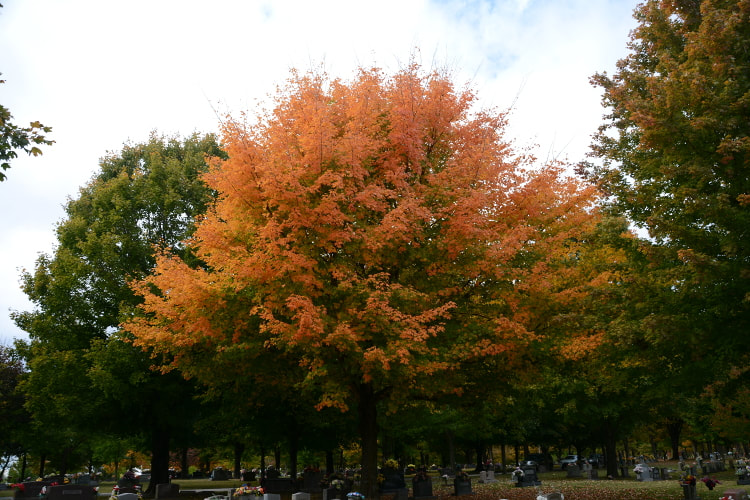 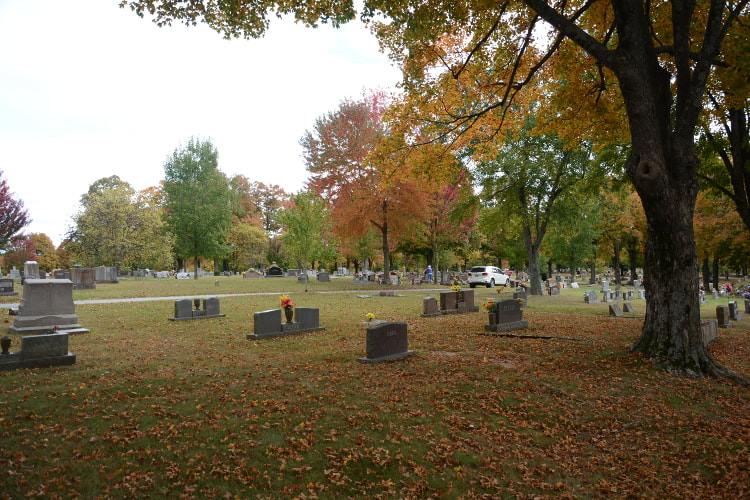 Tailgating My Lunch While Watching People 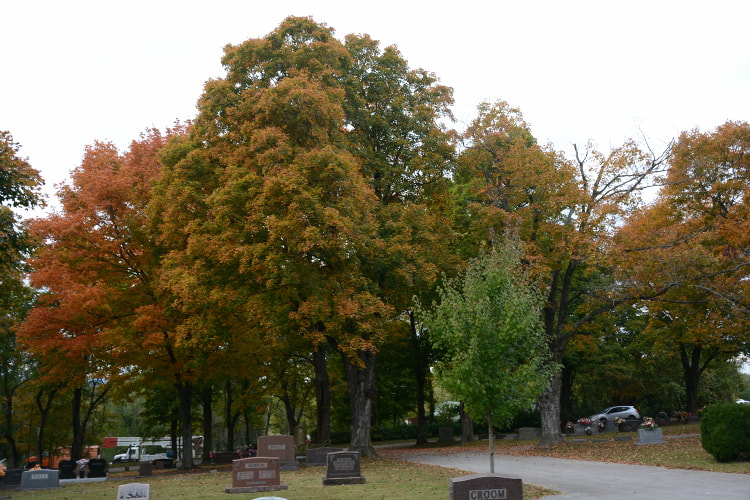 Last Look Before Heading Back Home
Capps Road takes me directly into the downtown area. I could not help but stop and take pictures of some very colorful trees along that road. I pulled into a driveway, asked permission to park for a few minutes then walked down the road snapping pictures. My next stop was Downtown Harrison, on the Square. City Hall is surrounded by picturesque trees and there was a stunning one (front page picture) and a blazing red one that stood out from the others. Once I finished with the downtown area I headed up to the Maplewood Cemetery and the newer Mapleleaf Cemetery. This is usually my litmus strip to test for how far along the color change is. Based on what I saw, I think full color will be sometime over the next week.

Fall in the Ozarks is one of the busiest times for those who want to visit and catch the fall colors. There are plenty of day hikes and road trips that will satisfy that desire. One nice thing is there are no fees to wander in the Buffalo River Park, or any of the wilderness areas or national forests. You can explore, take in the wonders, and view the color changes for free!
Back To Hikes & Photos