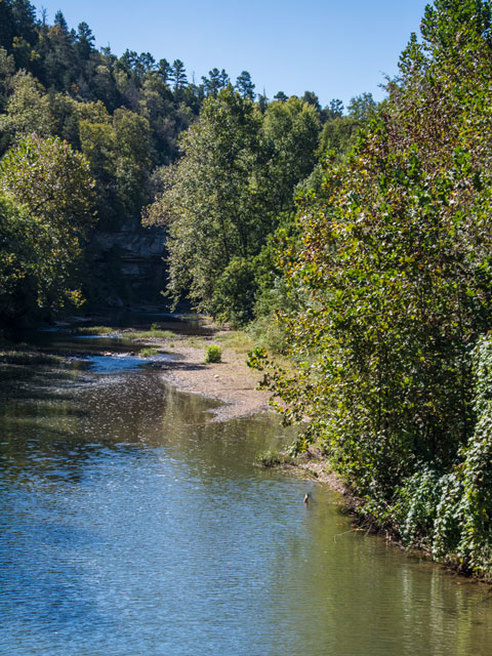 ​Thursday September 29th was starting out spectacularly. Mild morning temperatures with the promise of plenty of sunshine, blue skies with puffy clouds and a high about 82. Can't ask for anything better in the fall, here in the Ozark Mountains of Northwest Arkansas. The very faintest hint of fall color is starting to show up.

Our goal for this trip was to try and find the rest of the access points on the Kings River. We had such a good time finding the first two that we figured we could find the rest today. We decided to start at Marble this time and work our way back up to Marshall ford
then onto the other two access points, Trigger Gap and Rockhouse in the middle part of the river. 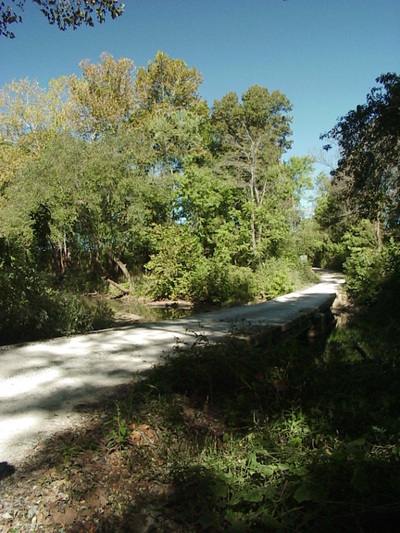 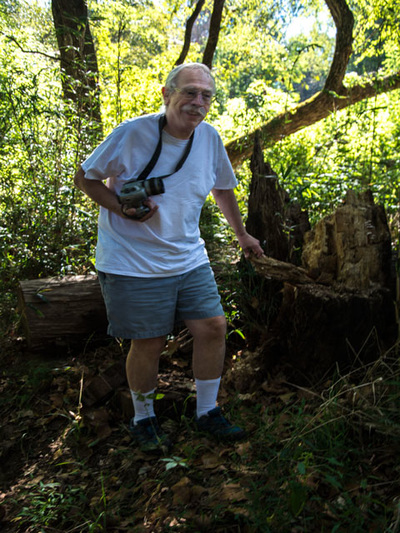 Walking Along The Bank
Finding the Marble access was easy...west on Hwy 412 to Marble. You can drive right down to the access if you want to launch a boat or canoe. Sunny and warming up with little wind and little water was what we found at this access. In order to get to the water we had to cross a one lane bridge and then park in the official area. It was a short walk down the road to the river. We continued to follow the road although it was mostly covered in water. Climbing up and over the wet areas we followed the river for a while, then turned back. 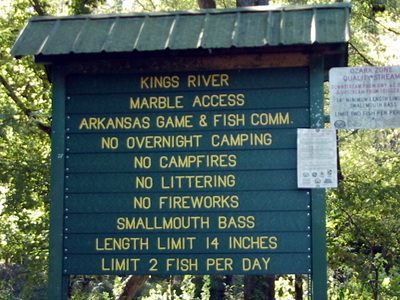 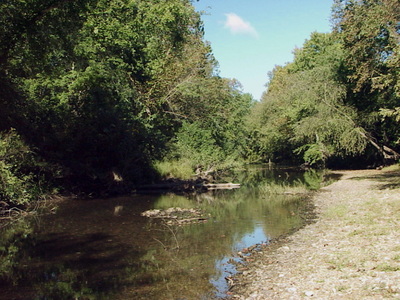 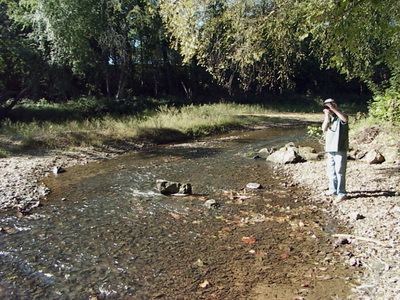 Low For Floating But Fun To Walk Along The Banks 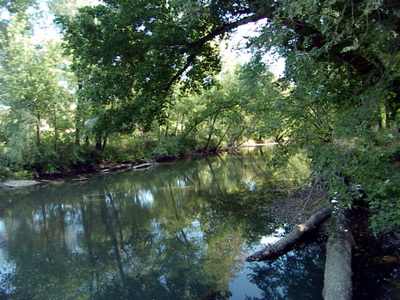 Kings River - Peaceful & Quiet
​​Continuing west on Hwy 412 we turned north onto Hwy 127, through the small town of Alabam then down the dirt road towards Marshall ford.  Along the way there were many spots to stop and just admire the scenery. Of course we particularly like old barns, homesteads and panoramic views. 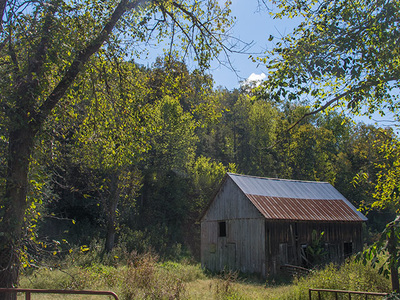 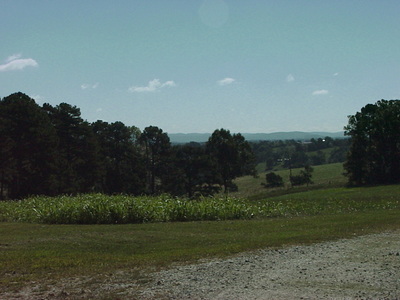 Picturesque View
​​​Once we got there we stopped to talk with an elderly lady who told us she had been born on the Kings River, just two miles away. She mentioned that they used to let folks camp on their land by the ford, but the people just left their trash, so they no longer allow it. Just takes one or two to ruin it for everyone. 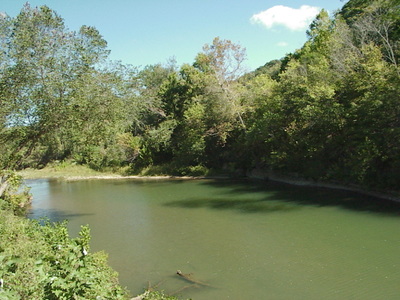 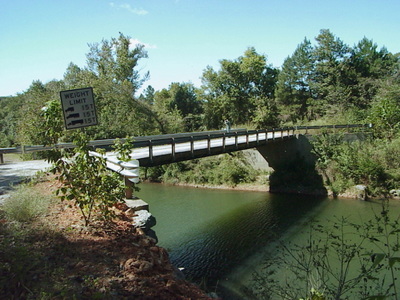 One Lane Bridge Across The River 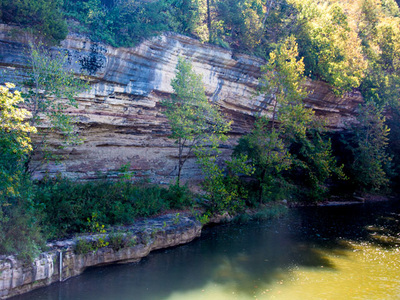 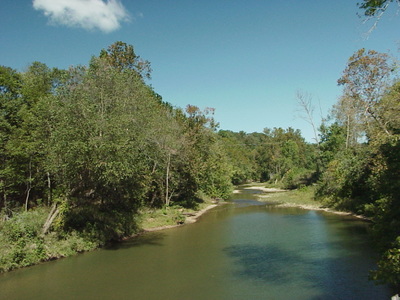 Just A Beautiful Day
Marshall ford has a one lane bridge across and we parked on the side where the lady lived and walked across. There was a very nice bluff on one side, and it looked like a very deep hole which is probably the local swimming hole. We could see trails leading over to that area. We did not spend a lot of time here since we still had two access points to find, Rockhouse and Trigger Gap and a long way to drive. 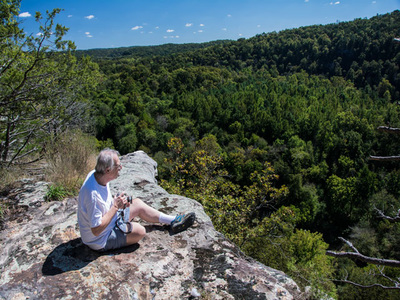 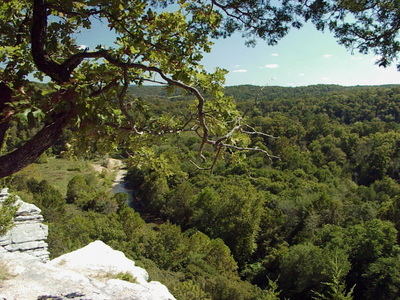 Looking Into The Wilderness 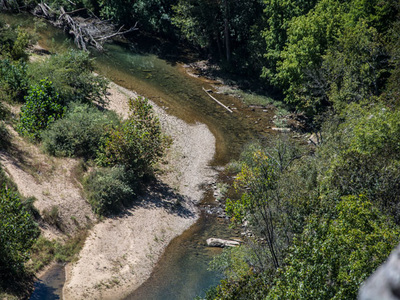 Looking Down On The Kings River 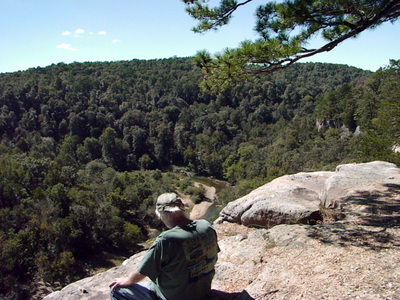 The Perfect Spot To Watch For Eagles
On our way back out from Marshall ford we saw a sign that said "Kings River Overlook" 5 miles. I had never heard of it, and neither had David so..we set the trip meter and turned down the slightly less traveled dirt road. It was a delightful drive, moving slowly along taking in the different views we came across. Sure enough 5 miles later we came into a parking area with a sign for the bluff. The road was gated here, and the sign said it was a short walk (1/2 mile if I remember correctly) to the bluff overlook. We decided to try it even though I had not brought along my knee brace nor my walking stick. Still I ambled (hobbled would be a better description) to the overlook and was amply rewarded with outstanding views. It was well worth the effort.

​After some time we decided that we had better get going. This side trip to the Kings River Bluff Overlook had taken up enough time that we would have to postpone our attempt to find the last two access points. We also saw a sign for a Science Center but we did not have enough time to travel down that dirt road to see what it was. Round trip time was about 5 hours and we topped off our day trip with a early supper at the Western Sizzler in Harrison. Their buffet is outstanding.
Back To Photo Galleries