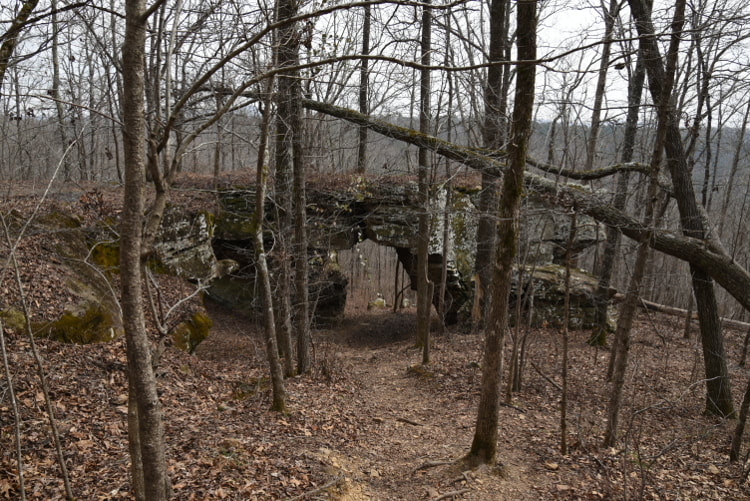 Along The Loop Trail Is Arch Rock

It was early March and we were having some reoccurring winter weather. Along with the brief dips into below freezing temperatures were periods of warm days and blue skies, the prelude to spring. I contacted my friend Bill to see if he wanted to take a drive and we both expressed a desire for a destination. I suggested Pedestal Rocks Scenic Area. I have been there (September 16, 2003) several times but not for many years and Bill only once when we first started hiking together. We thought it would be a fun trip and headed down Hwy 7 to Pelsor. East on Hwy 16 gets you there.

Once we arrived I decided I wanted to try the longer loop trail first, the one to Pedestal Rocks. As we prepared our gear we noticed a larger group having a picnic lunch after finishing their hike, and a few cars parked. It looked like we would not have to suffer a large crowd. We left our jackets at the car and headed down the trail 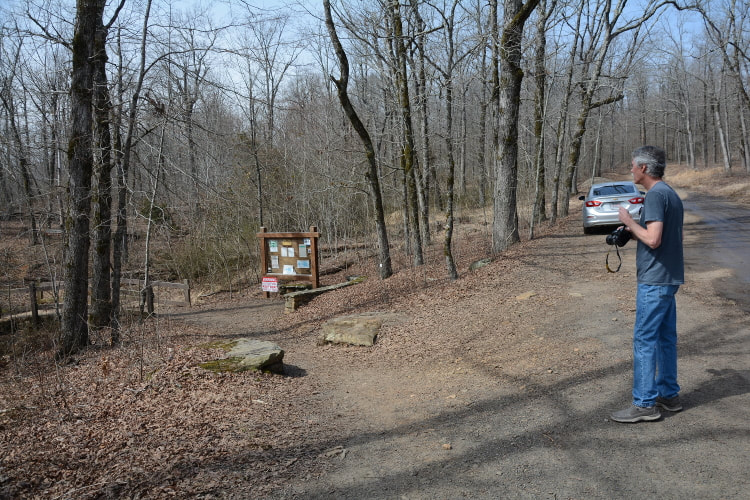 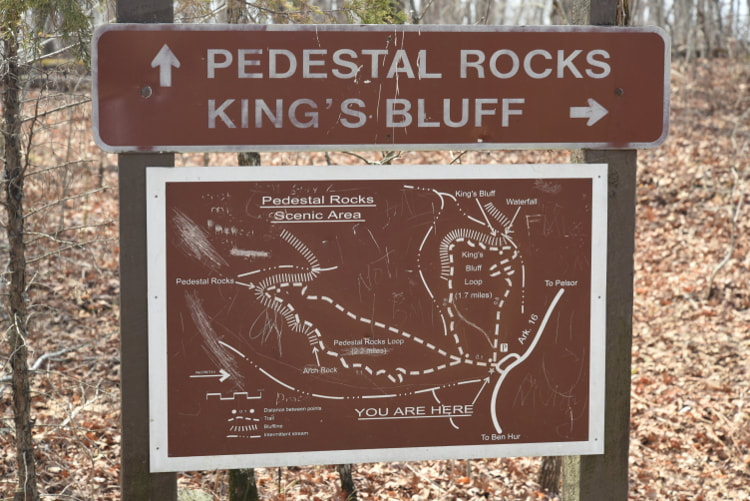 Which Way Should We Go? 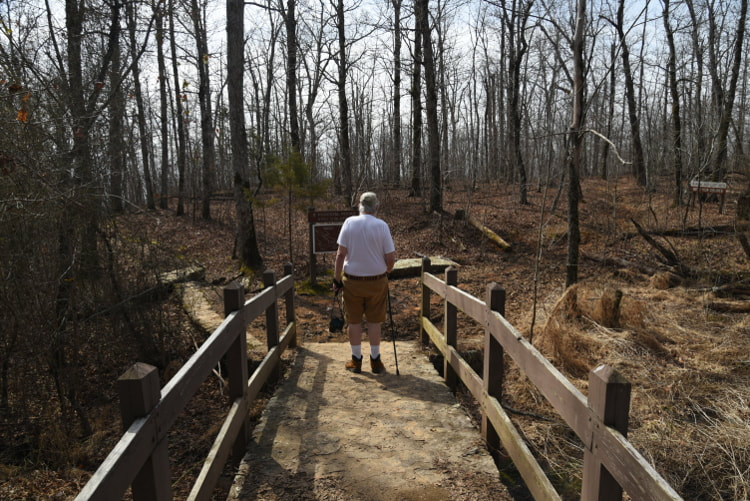 Bill Captures My Best Side 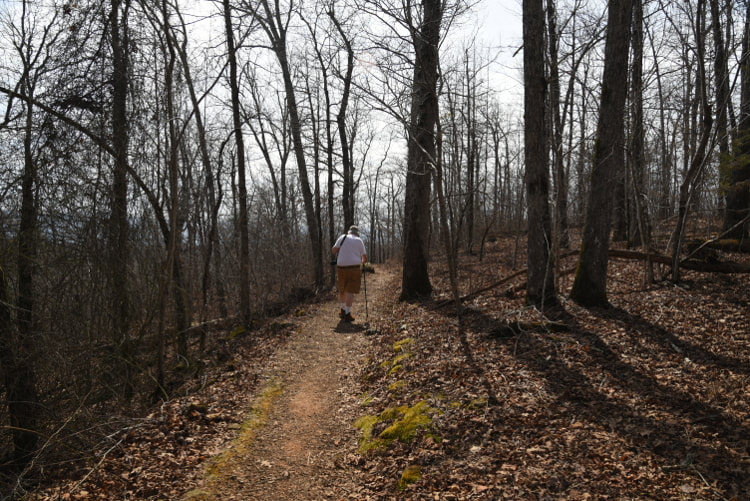 A Beautiful Morning For Walking 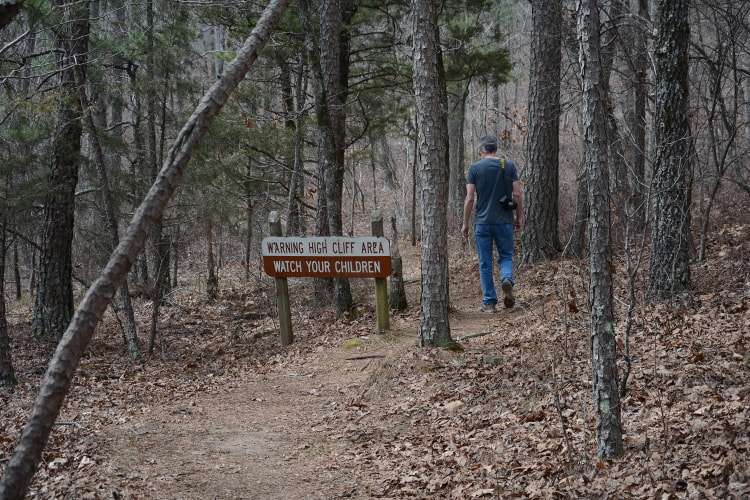 Actually Quite A Dangerous Area 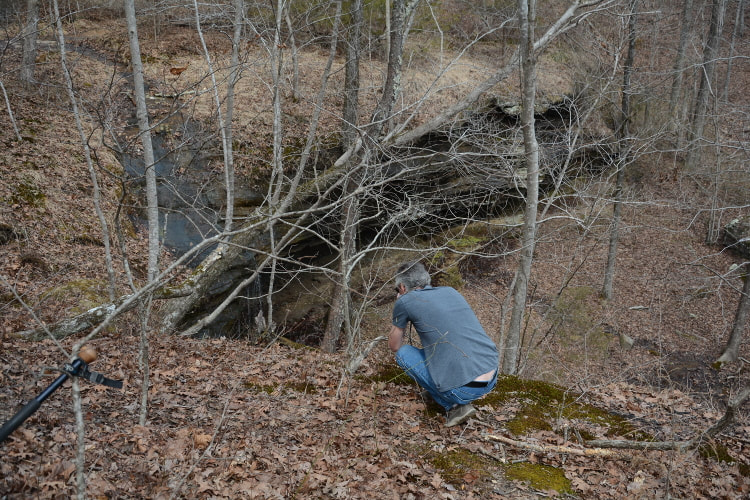 A Small Runoff And Waterfall 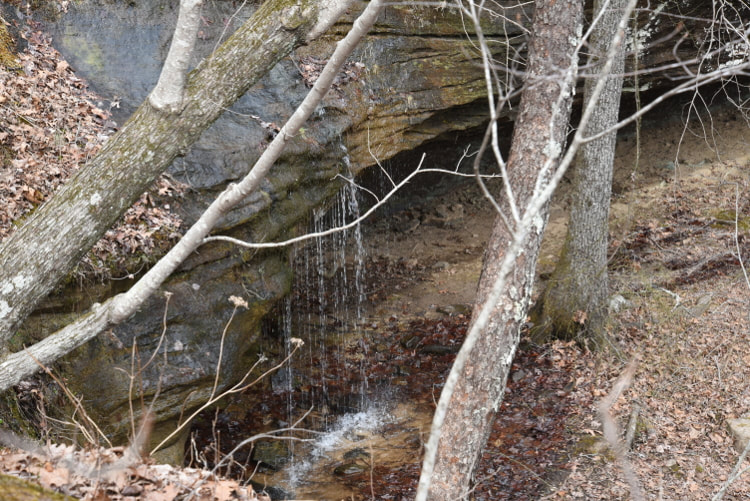 Better When It's Just Been Raining 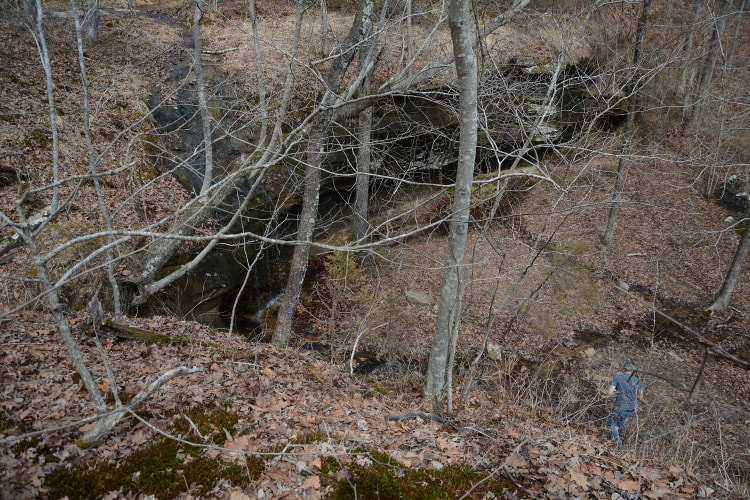 Why We Call Him Adventure Bill
The first part of the trail makes for a pleasant hike through the forest. A bit of a cooler breeze swirled around but the warm sun helped. Bill managed to scramble down a few declines to grab some waterfall pictures while I remained up on the trail. After maybe a half mile or so we reached Arch Rock. I have always found the geology of the Ozarks fascinating. This area has been eroding for many eons now, and the resulting standing rocks are quite unique and the arch is one of them. It is hard to imagine the amount of water that has run off to create that arch. While we were at the Arch, a couple of hikers came up from the lower path that makes its way around the base of the area and headed back to the parking lot. 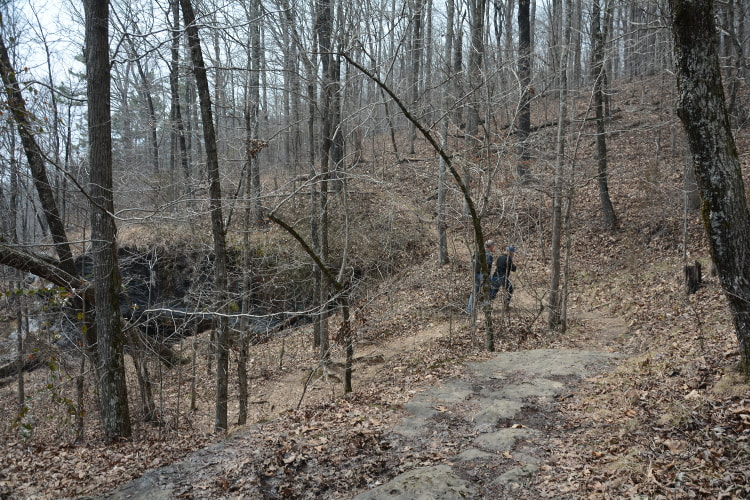 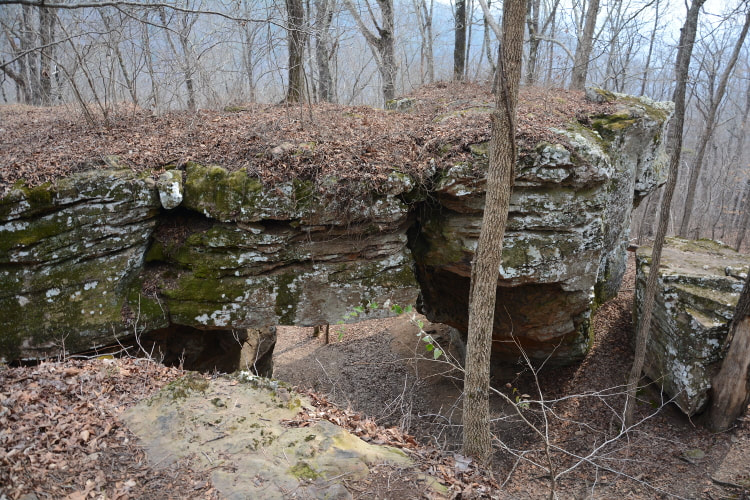 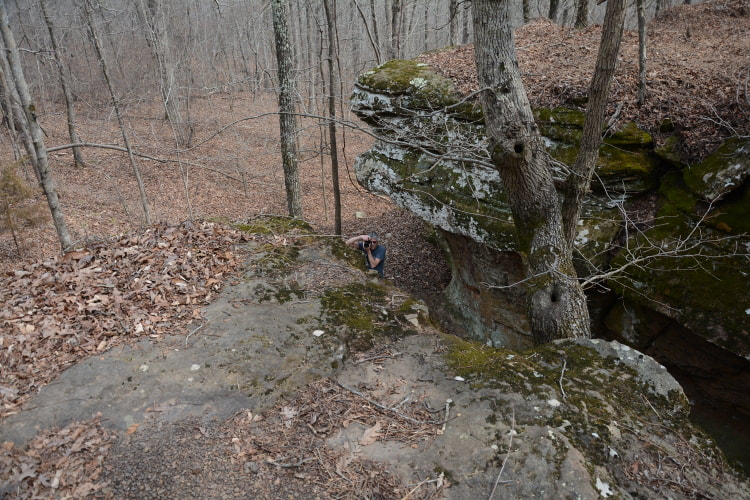 The Geology Of The Ozarks Is Spectacular 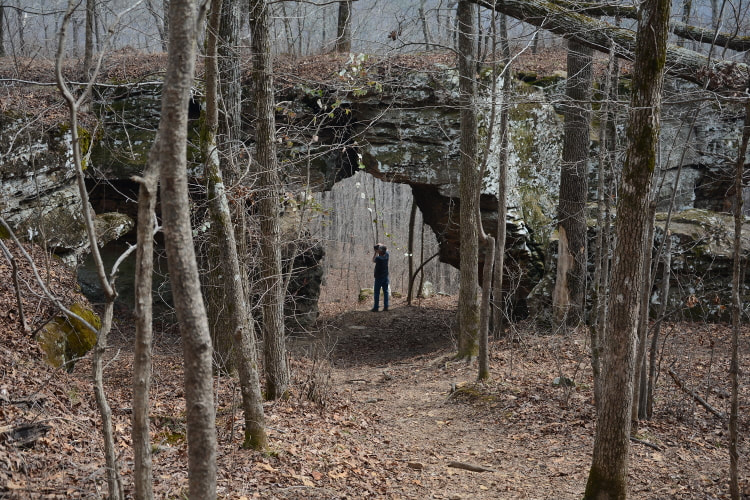 A Bit Of Perspective 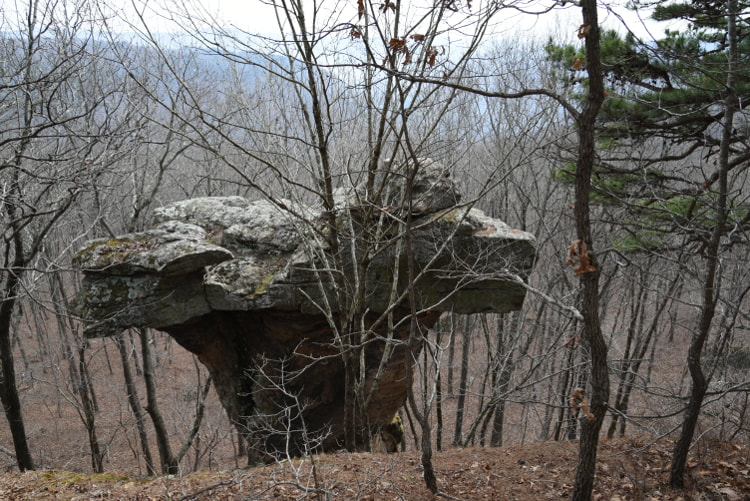 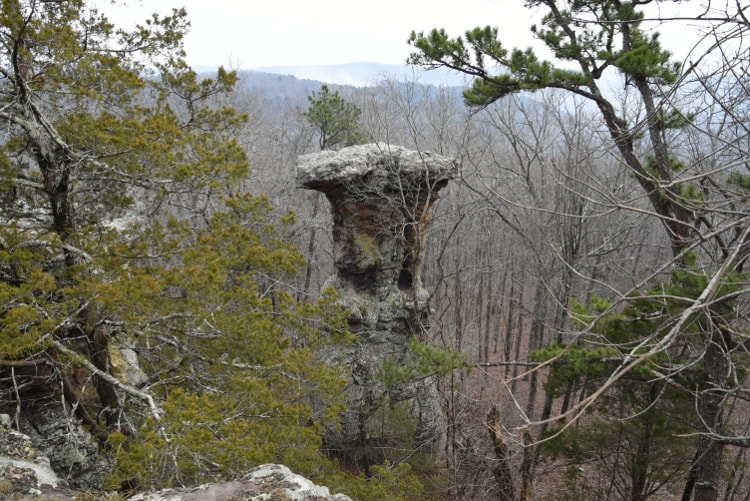 Some Have Been Rock Climbed 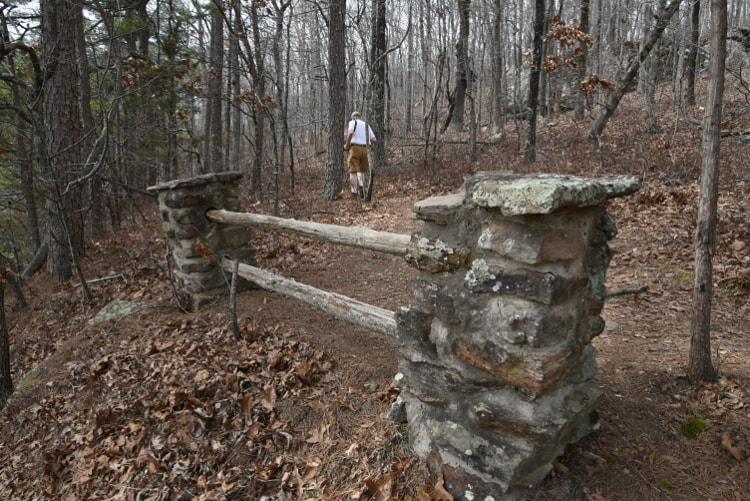 Trails Tend To Erode Away Close To Bluff Face 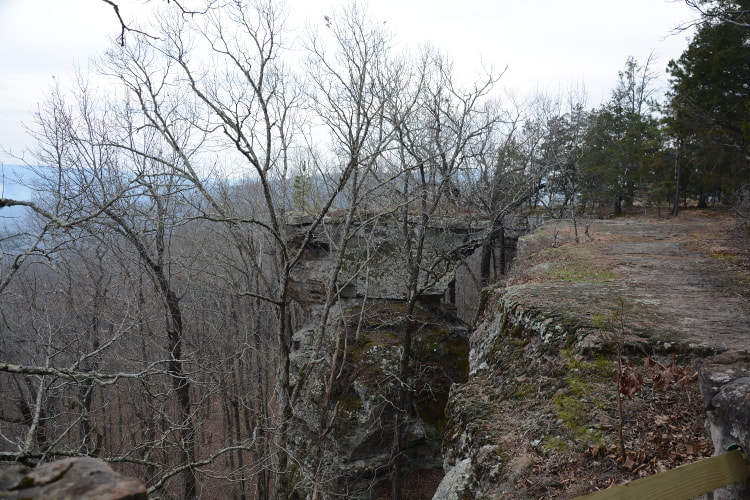 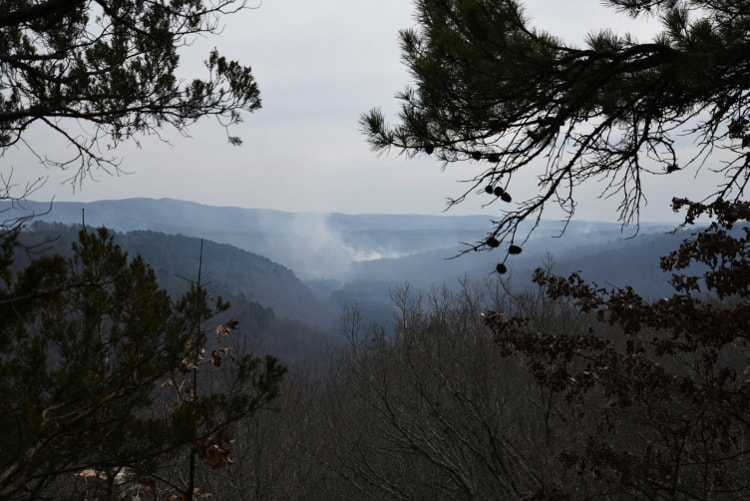 Another Proscribed Burn Obscures The Sky 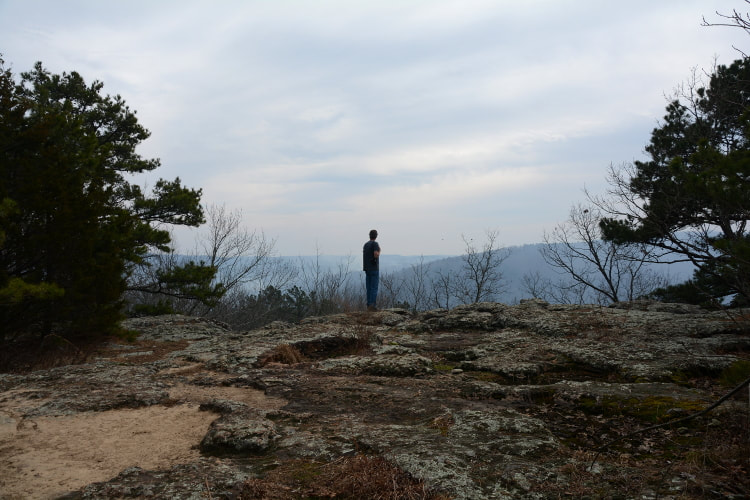 A Wonderful View Of The Area
We arrived at what seemed to be the main pedestal area. It had some barriers to keep people from falling off and also a few protecting large cracks in the formations. There was one spot which must have been a recent erosion because there was just some caution tape across the opening. This is not a place to bring very young kids. The pedestals, erosion and the geology in general can be viewed from the trail above or you can drop down and view the various strata that makes up the Ozark Plateau. 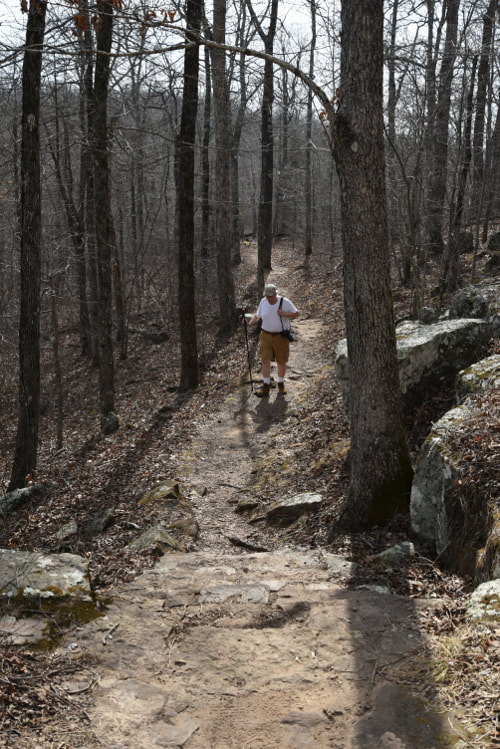 The Barefoot Traveler Makes It Back To The Parking Lot

We finished our exploration of the pedestals, and took advantage of some great overlook spots to take another break. Unfortunately there was another proscribed burn just down in the valley which again obscured the blue sky.  The walk back was uphill. Oddly enough hills in this part of the country are up all the way up, and up all the way down!! I must confess that I ran outta oomph on the last leg. Not the same guy I was when I did this same hike 19 years ago (see link in first paragraph). I was 53 then and now approaching 72. I am glad to be up and moving and able to still share the wonder of the Ozark Mountains of Northwest Arkansas. I hope you get a chance to visit and see Pedestal Rocks for yourself.
Back To Hikes & Photos