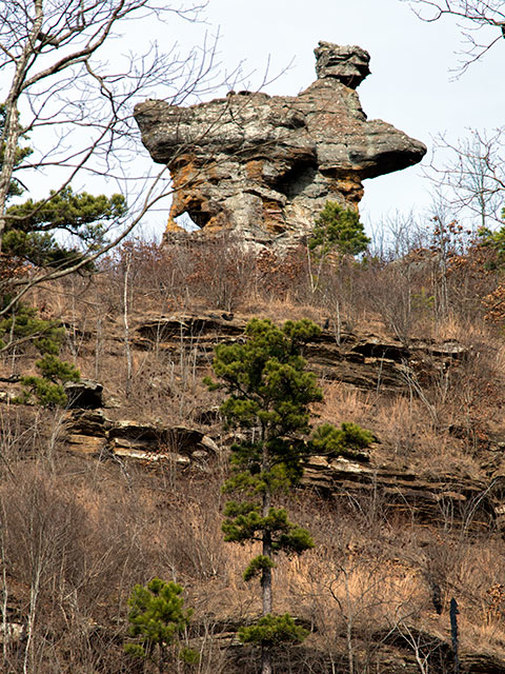 The month of January was a complete change from our unseasonably warm December. We did not get many chances to get out and do any hiking due to the very cold weather. However we did take several drives to scout out future trips and to get some pictures. I always enjoy driving the dirt roads in the National Forest or the Buffalo River Park and these trips were no exceptions. 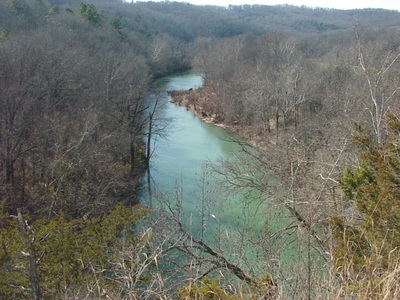 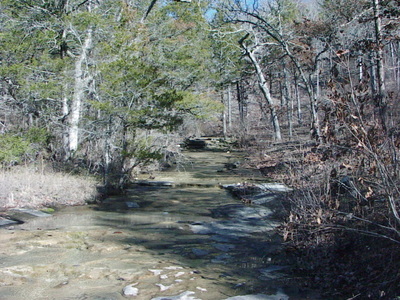 Small Waterfall
Our first trip was south on Highway 7 from Harrison. Just before you cross the bridge at Pruitt there is a dirt road to the right. We have often traveled this road. It is a pleasant drive (a bit bumpy though) and has excellent views of the river. Right away you can get a good view of the river. As we drove along the dirt road we stopped whenever our curiosity got the better of us. 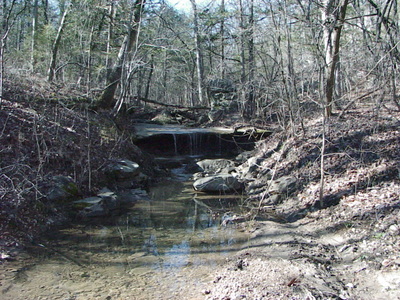 Close Up Of Waterfall 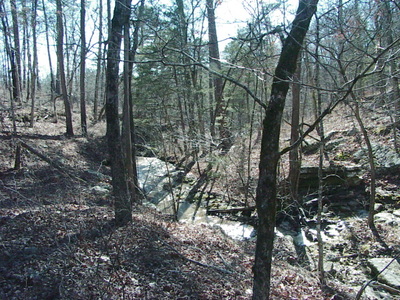 Following The Creek
We saw a small waterfall and stopped to check it out. In years past when my knee was in good shape, we might have spent an hour or two following it, but all I could do was to follow just a little and then turn back. 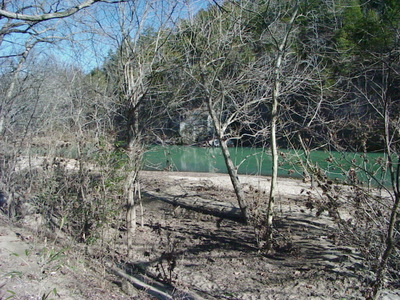 Hiking Down To The Heiner Hole 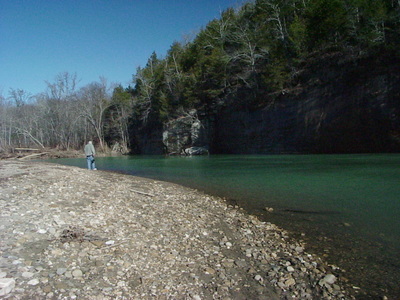 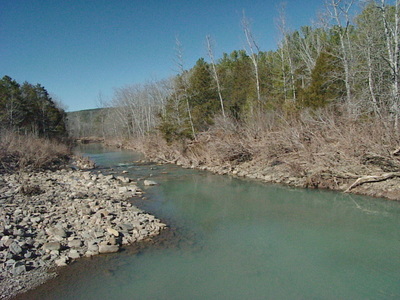 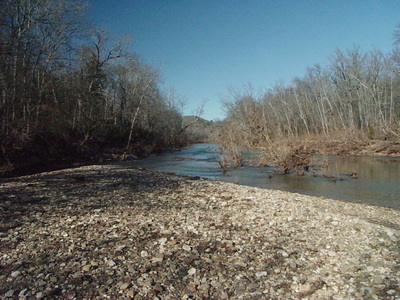 Down River View
Further down the road we came to the access to the Heiner Hole. In a previous article I stated that access had been closed, but I was wrong. We drove down to the swimming hole and spent a half hour of pure enjoyment at being outside (the sun came out.) The river had changed the look of the place, but it is still very beautiful. 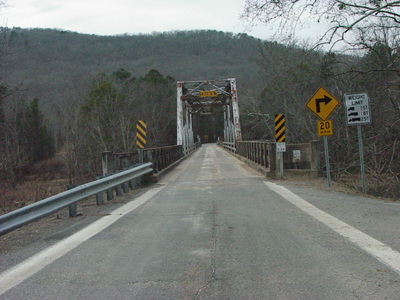 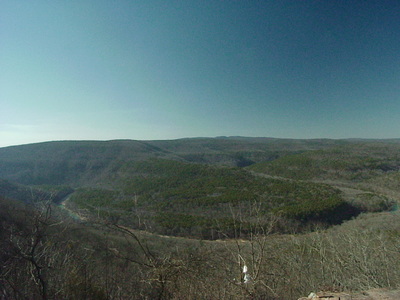 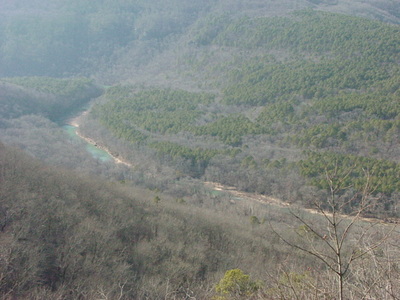 Close Up Of Above - Left Side 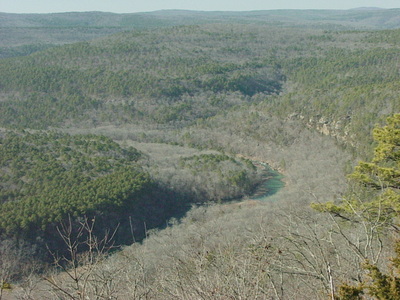 Close Up Of Above - Right Side
The other road trip took us south on Highway 7 to Pelsor, also known as Sand Gap. We turned on right on Highway 123. It was an overcast day, with the sun peaking out from time to time. We were looking for Buzzard's Roost Natural Arch which I had visited back in 2004. We passed over an old one lane  bridge that spanned the Big Piney. There was plenty of water and we saw several other individuals walking around down on the banks.  We didn't find our destination that day, but drove along Treat Road and then down several branches. The overlook on Treat Road was very impressive! Pictures do not show the full beauty of the place. 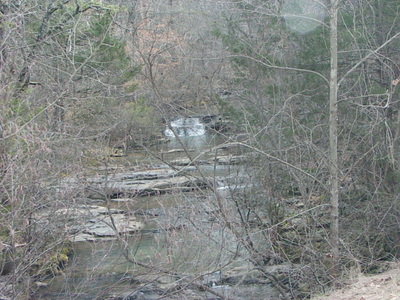 A Glimpse Of A Waterfall From The Highway 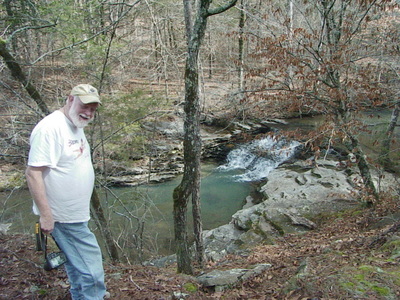 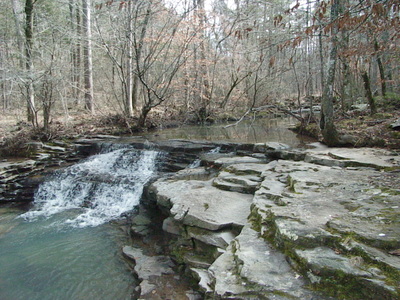 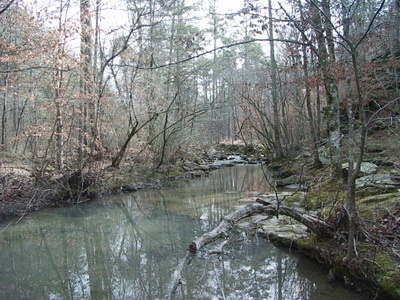 Meandering Creek Above The Falls
As we drove along Highway 123 we spied a small waterfall and decided to just pull off the highway and go explore it. The sun had come out, at least a little and it was quite pleasant to just amble along besides this creek. We believe it was Haw Creek because we were very close to Haw Creek camp ground but are not sure. Anyways the waterfall was nice..about a 6 footer, and beyond that was a meandering  creek. 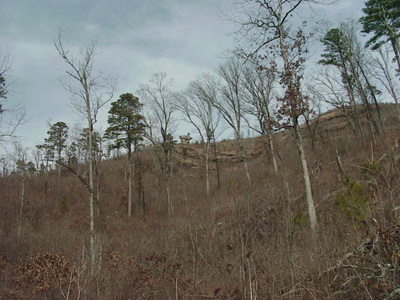 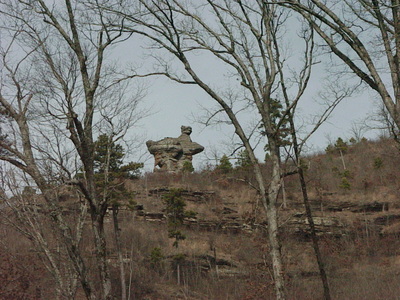 Pilot Rock
As we were traveling down one of the dirt roads we spied a rock way up top a distant ridge. We continued down the dirt road because it was heading up and we thought it might take us right up to that rock...but it didn't. So we pulled over when we had a decent view and tried to get some pictures. My camera is pretty old but did a decent job of grabbing a shot. David has a much better camera with many lenses. He took out one of his telephoto lenses and took the best picture, which is at the top of this page.
Back To Hikes