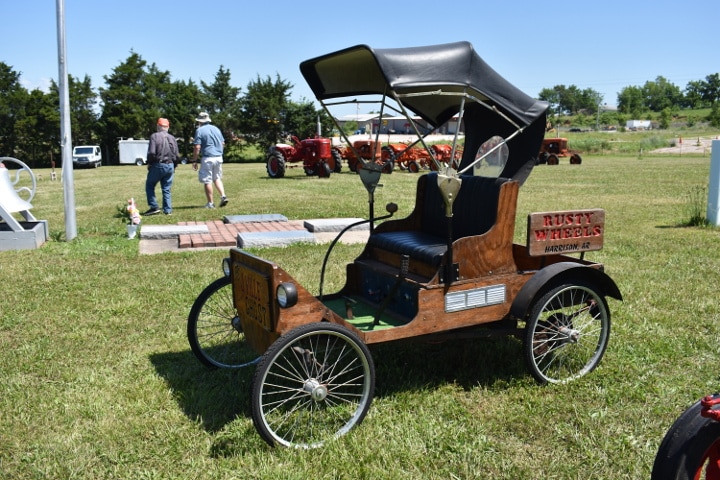 .Friday, June 9th was starting out beautiful. Another sterling weekend was ahead. South on Highway 65 the Rusty Wheels Old Engine Club was having their spring show. I have driven past their location many times over the years but it has always been closed. On this day however I saw the sign. the gate was open so I turned in. You can't miss the place, it has a John Deer tractor displayed up in the air, on an old lift.

​This was the morning when the club members make sure the displays are all set up. Some members were going around and starting up all the equipment and engines they planned on running over the weekend. It was a fascinating morning for me, a city kid. 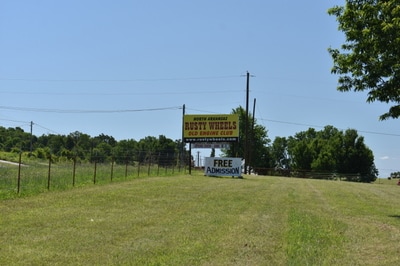 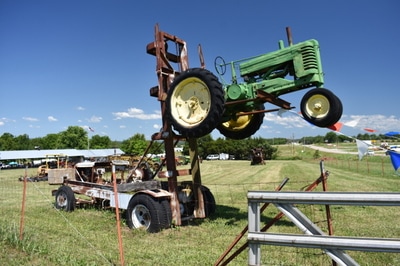 Turn At The Green Tractor 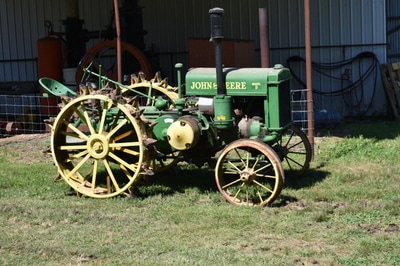 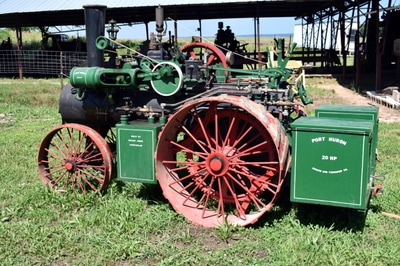 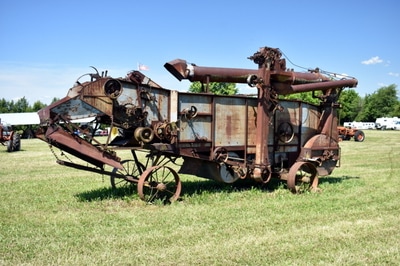 Not Sure - Some Sort Of Harvestor
The first item I saw was a very old John Deer tractor. I wandered around admiring the various old tractors, engines and equipment that was on display. The variety of equipment amazed me. Off in the distance I could see an old rock crusher while next to one of the buildings some of the members were trying to start up a very large generator. 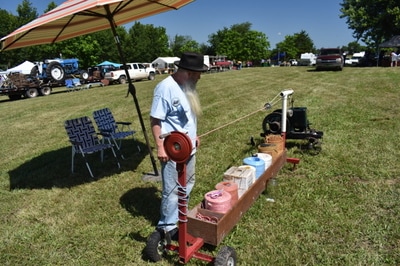 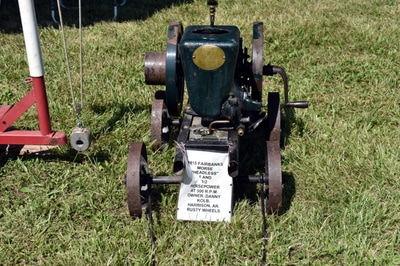 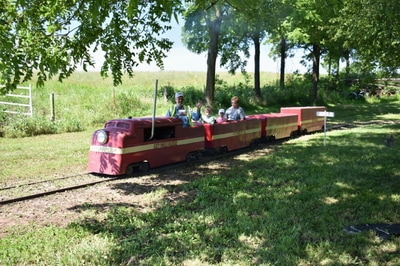 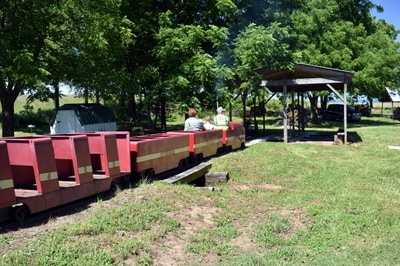 Pulling Into The Station
​"All aboard for the first run of the season on the Rusty Wheels Railroad" came the announcement over the speakers. I made my way over to the station where the small train loads up. It was early still, and not too many folks were about, but two kids accompanied by grandma were waiting at the platform. Once they were on board the train left the station. It was really cool to watch.
​Once the train finished its first run, I wandered down to the building where a saw mill was running. They were demonstrating how to cut oak lumber. It looked very dangerous and only very knowledgeable people should run such a machine. The man who brought the raw logs was taking the finished pieces and loading them into his truck. 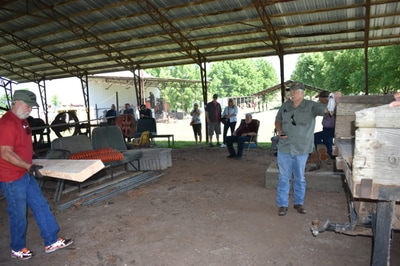 From The Mill To The Truck 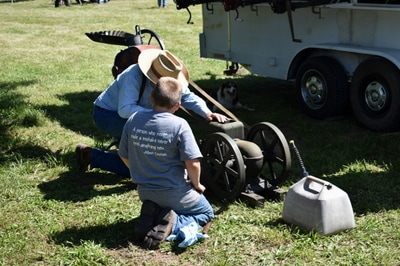 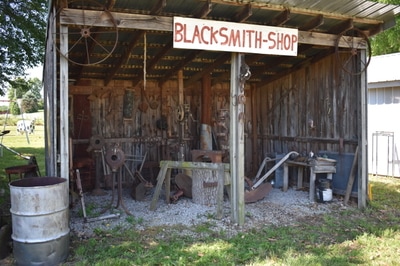 For Repairs A Blacksmith Shop 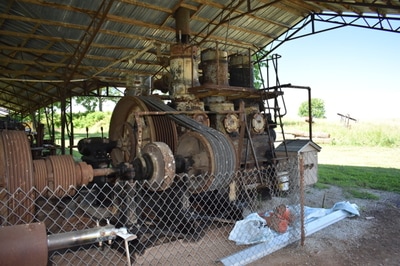 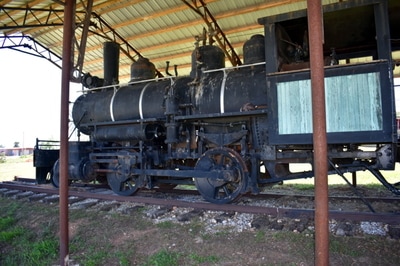 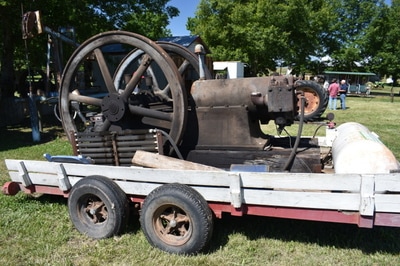 Have No Clue!
There were other displays under roofs so I make my way up to that area. There was a old steam train engine, and a huge steam engine that powered very large belts. They were on permanent display and protected from the elements. The club members must have put in many, many hours getting these old bits and pieces of history back in working condition! 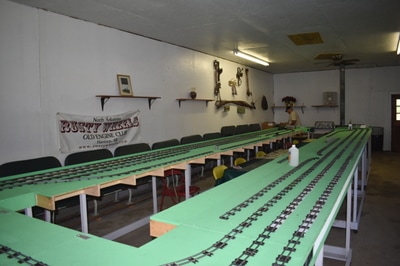 Starting To Set Up The Model Trains 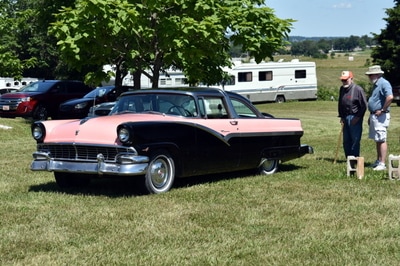 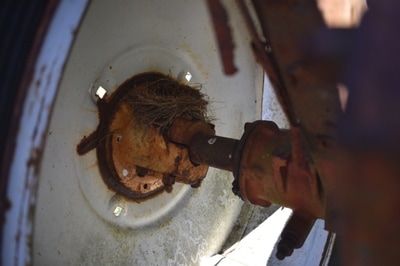 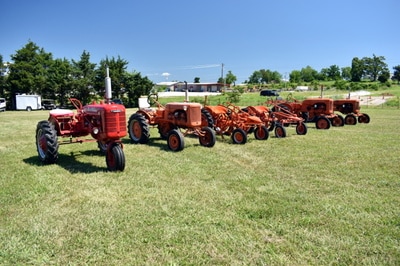 The Old And The New
I stopped in at Rosie's Chuckwagon for a little refreshment and then went down to check out the Rusty Wheels Toy Train Club display, but I was there too early. They had just opened up and were unpacking the trains and accessories, getting ready to populate the layout. I walked over to where the classic cars are displayed, and then up to where the tractors were parked in a row. Both the old and the new were there. While I was walking, a kid about as tall as the tractor axel pointed out a birds nest he had found. Neat stuff.

I really enjoyed my visit to the Rusty Wheels Old Engine Club's Spring Show. It was an education as wall as a trip backwards in time. What amazed me the most was that most all of the stuff really worked!. One of the attractions of life in a small town is that the annual shows, festivals and events get wonderful turnouts. I am sure that the Saturday crowd was very large. I hope you get the chance to visit this unique attraction, who knows, you might become a member.
Back To Hikes & Photos