Springs And Other Things 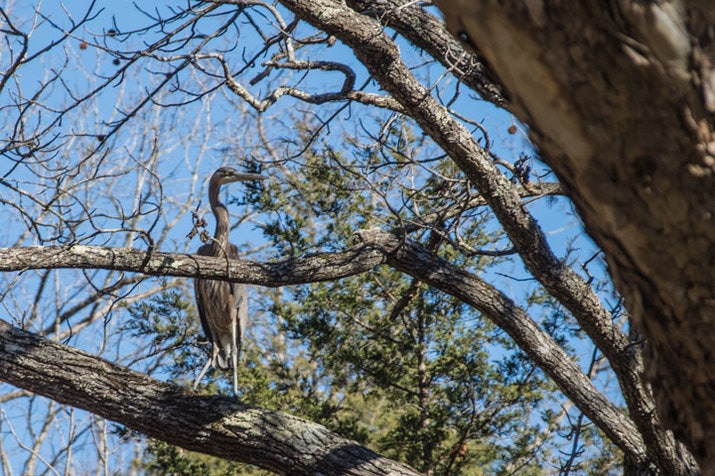 I started publishing The Barefoot Traveler on the old OzarkConnections.com web site in 1997. It's 2017 and I am celebrating my 20th year of writing about the Ozark Mountains of Northwest Arkansas. I never thought it would go this long! Last issue, "Old Dogpatch" was certainly a good one, and I enjoyed my time away from the computer.

As mentioned previously, I have a new Nikon camera to use and I have been going on little road trips trying to learn some of its many features. Many of the pictures did not turn out very well, but some did. I hope you enoy them. 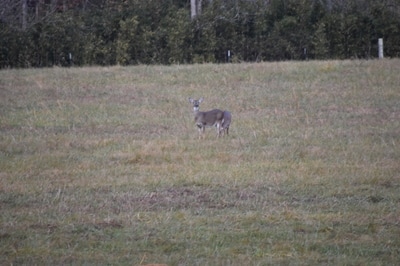 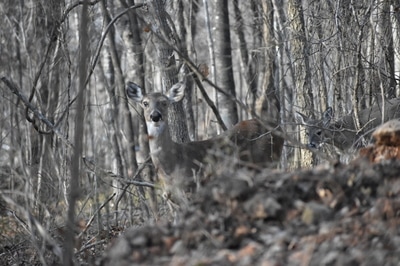 Can You See Me Now? 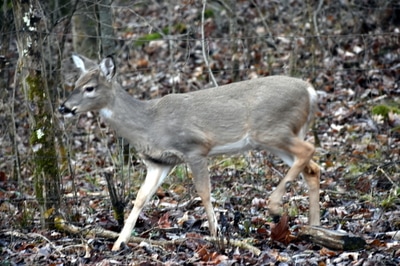 Heading Down The Road 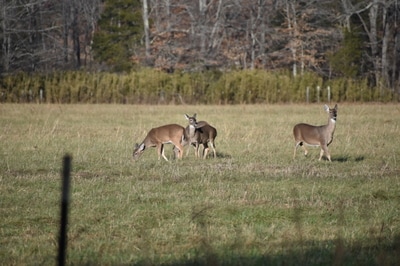 Christmas Eve Grazing
​It was Christmas Eve Day and I had been invited to lunch at a dear friends house deep in the Ozark Mountains, on the Little Buffalo River. I took my camera and put the telephoto lens on for the first time. I was hoping to get pictures of deer in the fields that parallel the Murray road as it winds it's way into the valley of the Little Buffalo. I was not disappointed. I was able to just pull over, lower the window and snap away. 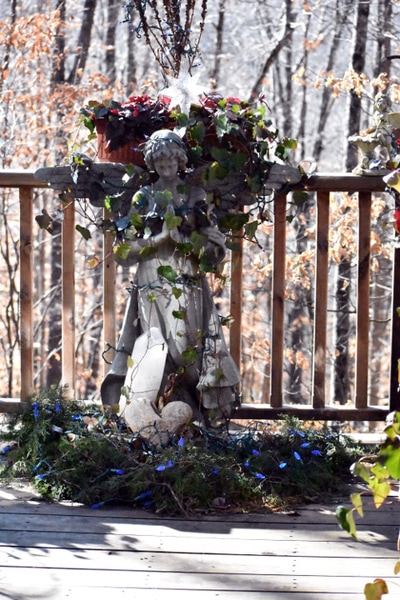 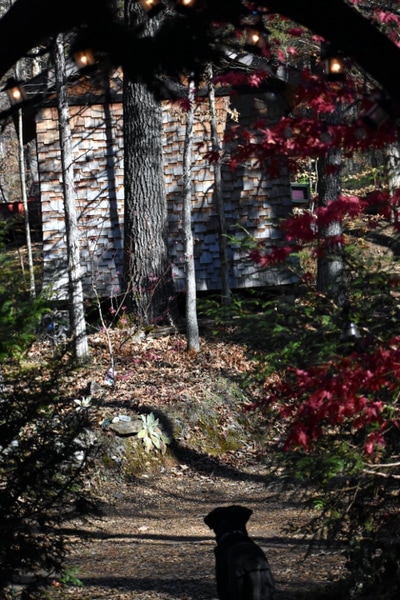 Chanti Leads The Way
It was a beautiful day and we spent time on her deck and in the house catching up on each others lives. The house was decorated for the season and music was in the air. While waiting for the lunch to finish cooking, we decided to take a quick trip down to the river.. 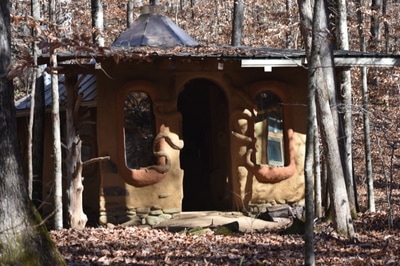 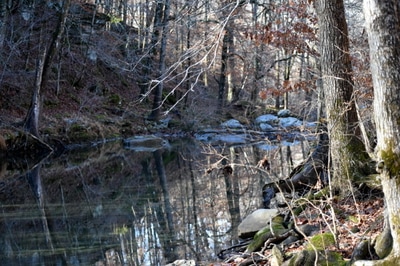 Winter On The Little Buffalo River
​My friend's four-legged companion Chanti led the way for us. Down the path and past the magical little cob house on the Little Buffalo we made our way to the water. There was still some water despite the dry conditions we have been experiencing.  We returned to her house for a wonderful meal before I had to head home. 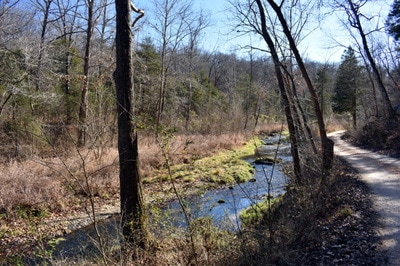 Dirt Road Follows The Creek
A couple days after Christmas promised to be a sunny day so I decided to drive down to David's house and kidnap him for a ride down a dirt road. I had no plans on where to go and asked him to just choose a road, and he did. We meandered through the countryside passing through old Western Grove. I saw a beautiful, but empty old stone and wood house, and beside it in the back an old covered bridge crossing the creek.​

Enjoying The Beauty Of The Creek 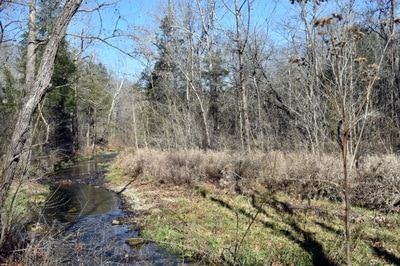 Hiking Down Mill Branch
We decided to head towards the Mt. Hersey access point on the Buffalo National River. We followed the dirt road as in made its way through private land and then entered the park. It was a very nice day out, and neither of us needed a jacket, just a long sleeve shirt. We stopped quite a few times to explore and take pictures. At one point along the creek we found someone had built a dam across and there was remnants of some sort of water wheel structure there. We were not quite sure what it was.  We followed this creek until it joined the river at the Mt Hersey access. 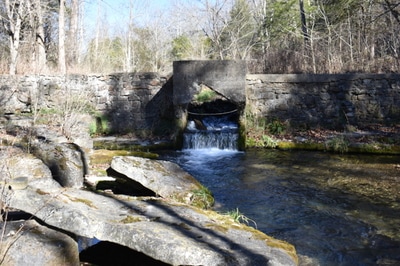 Dam Across Creek With Water Feature 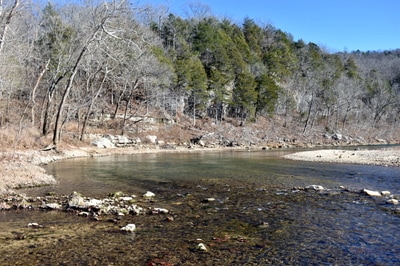 Mill Branch Feeds The Buffalo River
David mentioned that the creek had been dry and suddenly it had water in it, and quite a bit of water. He speculated that perhaps there was a spring back along the creek that we might be able to locate. So we turned back and retraced our steps till we came to the point where there was no water, turned around again, parked and slowly made our way down the creek. Sure enough suddenly there was water, and it was bubbling out of the ground right in front of us. We could see at least two places where the water was coming to the surface, one large bubbling spring and one smaller one. Pretty darn cool. That also explains why the creek had that water feature down from the springs. Whoever built it knew there would be water year round. 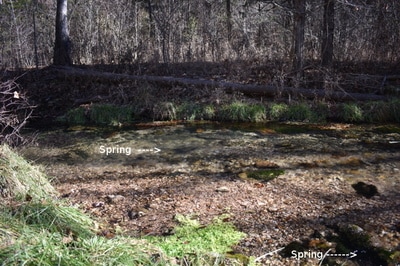 Springs Bubbling To The Surface 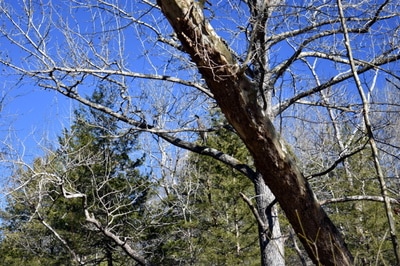 Blue Heron Lands In Tree
As we were standing there suddenly a great blue heron flew up and landed in the tree right in front of David. I guess it came here often because of the fresh water. He sat in the tree for some time, allowing us to get a few good shots of him before he flew off.​ I have not yet learned how to take movies with my new camera but David managed to get a nice video of one of the bubbling springs.
Once I got home I did a little research and I believe that we were following Mill Branch which empties into the Buffalo National River. The largest spring in the park is Mitch Hill Springs. Looking at Google Earth and my maps I belive that is where we were.  There might have been bigger springs above where we were. Would be interesting to go back and see.  One thing our part of the country has to offer is the chance to just get out and explore. Grab the family and come have some fun! You never know what you might find or see.
Back To Photo Galleries